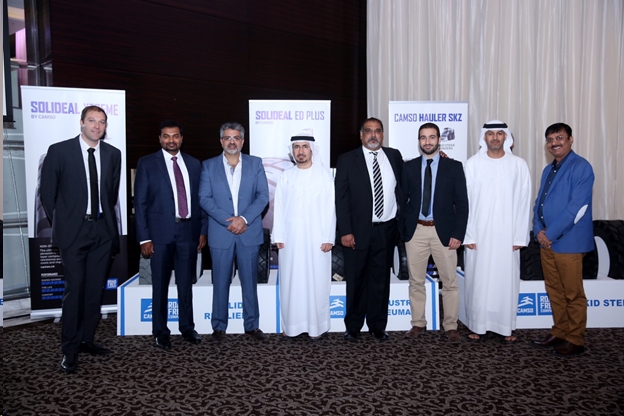 Al Saeedi Group highlighted Camso tires by organizing a gettogether for Camso dealers at the Le Meridien Hotel in Dubai on October 24th. Camso tires, which were formerly known as Camoplast Solideal is made by Solideal in Sri Lanka.

Speaking at the event, Anish Malattiri Director of Al Saeedi group said that Camso and Al Saeedi group have had a longstanding partnership over the past over 28 years and this has raised the profile of Camso products across the UAE in almost all the industrial and construction equipment segments over the past years. It has also contributed to the wide product range and success of the Al Saeedi Group.

Camoplast was set up in 1982 as a company to develop enhanced tracks for snowmobiles.The company went on to specialize in the development of belts for original equipment manufacturers (OEM) and for their aftermarket clients, as well as the development of track systems for ATV, UTV and agricultural equipment. Both Camoplast and Solideal merged in 2010 to form Camoplast Solideal and emerge as a market leader in the design, manufacture and distribution of off-road tires, wheels, rubber tracks and undercarriage systems to service the agricultural, construction, material handling and power sports industries. In 2015, Camoplast Solideal was renamed as Camso, the Road Free Company Currently, the company has over 7,500 dedicated employees spread across advanced R&D facilities and production facilities located in Europe, Asia and North and South America.

Camso manufactures products under the Solideal and Camso brands and supplies them to OEMS in addition to distributing them in the replacement market through its global distribution network.

The Al Saeedi Group in the UAE is one of the largest distributors for industrial tyres here and began its life in 1988 as a small enterprise in Dubai. The company has grown into a large group that specializes in tyre distribution and service solution and has a presence in many regions including GCC, India and African markets. The Al Saeedi Group has eight state-of-the-art service centers located in strategic areas like Al Quoz, Deira, Dubai Investment Park, Jebel Ali Free Zone, Qusais, Rashidiya and Mussafah. Al Saeedi is the exclusive distributor for several internationally renowned brands like Camso (Solideal) tires, Triangle tires, nexen tires, Sayan truck tires. The company also represents Schrader Off The Road Tyre Repairs, Rader Vogel – Vulkolan Wheels and Castors and Sicam tire equipment. The company also deals in premium tires from brands like Michelin, Bridgestone, Dunlop, Pirelli, Goodyear and Yokohama. The company has tried to enhance customer service levels with the introduction of seven mobile service units that are available 24 x 7 to cater to the needs of customers. Al Saeedi Group has received ISO 9001: 2008 accreditation for Quality Management and believes in providing top class service to all its customers from product availability to tire fitment and after sales service.