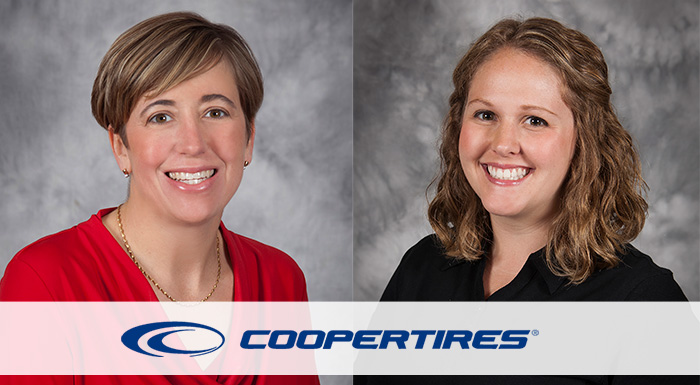 Two employees at Cooper Tire won the 2016 Women in Manufacturing STEP (Science, Technology, Engineering and Production) Ahead Award announced by The Manufacturing Institute highlighting the company’s focus on advancement of women. The two women who qualified for the award are

Heather Mosier, Sport Utility Vehicle and Light Truck Tire Development Manager who is part of Cooper’s North America Technical Center team based in Findlay, Ohio, and Nichole Williams, a Six Sigma Black Belt at Cooper’s tire manufacturing facility in Tupelo, Mississippi. The two women became part of a select club of 130 women who were chosen for the award on a national basis from hundreds of nominees.

The STEP Ahead Awards are part of the larger STEP Ahead initiative, which was launched to promote the role of women in manufacturing industry through recognition, research, and leadership.

80 percent of American manufacturing companies face moderate to severe shortage of available, qualified workers, and women make up less than 30 per cent of the workforce. This initiative is part of the effort to close the skills gap including the gender gap.

The STEP Ahead Awards program, which was instituted in 2013, recognizes leadership and excellence in women at all levels of manufacturing ranging from the production line to senior executives. The honorees will receive their awards at a reception which will be held on April 21 in Washington, D.C., during which each winner’s story will be told including their career roles and the part they have played in their community. Member of Cooper’s senior leadership team will attend the event along with Mosier and Williams.

Commenting on the awards, Roy Armes, Cooper’s Chairman, President and Chief Executive Officer said that it was highly gratifying to see that two women from Cooper win the awards from the hundreds who were nominated. He added that both women play highly crucial roles at Cooper and serve as impressive role models to other employees. He went on to congratulate both Heather and Nicole on behalf of everyone at Cooper.

Heather Mosier completed a program in chemical engineering from the University of Cincinnati for her bachelors degree and went on to get a master’s degree in manufacturing management from Kettering University, Flint, Mich. She has been in the automotive field for the past 20 years and in her current position as Sport Utility Vehicle and Light Truck Tire Development Manager, she is highly involved in the production of new products at Cooper’s North America Technical Center. Three new award-winning products for Cooper Tire including the Discoverer SRX, Discoverer A/TW, and the Discoverer STT Pro were developed under her leadership. She also plays an active role in her community as an active volunteer for the Hancock Soccer Association and the Jefferson Primary School in Findlay. She has previously worked as an advisor and mentor for middle school students, working with them to polish their skills in planning, assembly, inventory control, and basic accounting.

Williams, was honored as a winner in the STEP Ahead Award Emerging Leader category, one for women from the manufacturing segment who are under the age of 30. She has a bachelor’s degree in chemical engineering from the University of Mississippi, Oxford, Miss. and has earned a Black Belt in the Lean Six Sigma program at Cooper’s Tupelo tire manufacturing facility. She joined Cooper in 2013 and utilizes her project management and Six Sigma skills to make manufacturing more efficient and reduce waste at the factory. She heads the Tupelo plant’s process capability improvement efforts, and is also in charge of Lean Six Sigma Green Belt training. Recently, she led a cross-functional team that wastasked with a complex, project to streamline a major manufacturing process at the plant.

Nichole is a member of Cooper’s “Dream Team,” a group of early-career employees chosen from across the United States who visit local schools to promote manufacturing to students as an attractive career option. She is also a member of the “Cooper Troopers,” the Tupelo plant’s community service group.