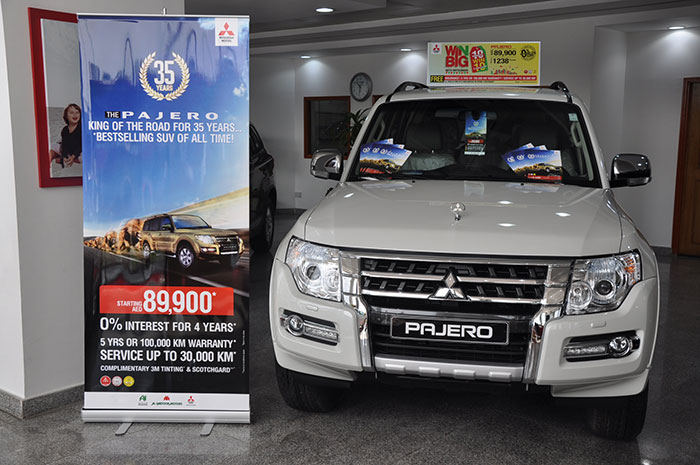 Mitsubishi Celebrates 35 Years of the Pajero in the UAE

Ever since it was launched in the UAE by Mitsubishi’s exclusive distribution partner in the country, Al Habtoor Motors, the Mitsubishi Pajero has been the king of the road here. Over the past 35 years, it has grown in popularity and is one of the most popular vehicles in the SUV category due to its combination of style, dependability and ruggedness.

The first Pajero prototype was revealed to the world in November 1973 at the Tokyo Motor Show, with the second one following five years later 1978. The Pajero transformed the image of the SUV as a purely utilitarian vehicle, allowing customers to see SUVs as recreational vehicles. The Pajero made its rally debut in January 1983 at the Paris Dakar Rally and became the most successful model to participate in the rally, winning 15 of 32 races. Other rallies in which the Pajero was the frontrunner included the UAE Deser Challenge, Tunisia Rally, Italian Baja, Morocco Rally, Por Las Pampas and the Granada-Dakar.

The Pajero is immensely popular in the UAE. It is the most preferred 4WD in the region based on its rally heritage, low maintenance, smooth drive, its combination of active and passive safety technologies and its iconic image. It has become synonymous with safety, reliability, quality and ultimate pride and in the past 35 years has become the Preferred Family Vehicle and the Best Value Japanese SUV in the UAE.

From a resale perspective too, the Pajero is a good buy as it has the best residual value in its class. Currently, there are more than 100,000 happy Pajuero uses in the UAE.