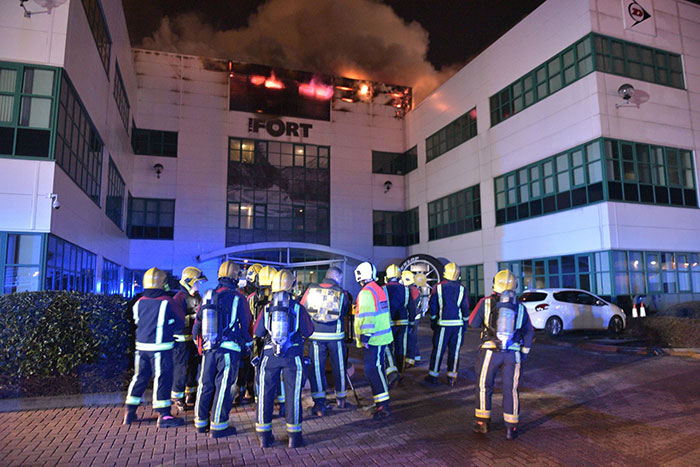 A devastating fire that raged for almost five hours caused significant damage at Goodyear Dunlop’s UK headquarters in Castle Bromwich, Birmingham. According to reports, the cause of the fire at the Wingfoot Way site is unknown but it spread through the building’s ventilation system and was visible from several miles away. There are conflicting reports stating that the fire either started on the rooftop or in a warehouse that is next to the office block.

The West Midlands Fire Service was called in just after 7 pm and close to 100 firefighters battled the blaze before it was finally put out at 2345. 15 trucks and two aerial platforms were used by the fire force to handle the blaze. The hydraulic platforms were used to rise above the blaze and direct water towards the fire. Many of the firefighters had to use breathing apparatus to keep their lungs clear.

Fortunately, no one was injured in the fire and it was limited to the office area The damage would have been far greater if it had spread to the tire storage People in the neighboring residence buildings and industrial units were asked to close their windows and doors and there was heavy traffic in the area due road closures. Workers were also asked to evacuate from the Jaguar Land Rover plant in Castle Bromwich which is quite close.

An investigation has been launched regarding the cause of the blaze.