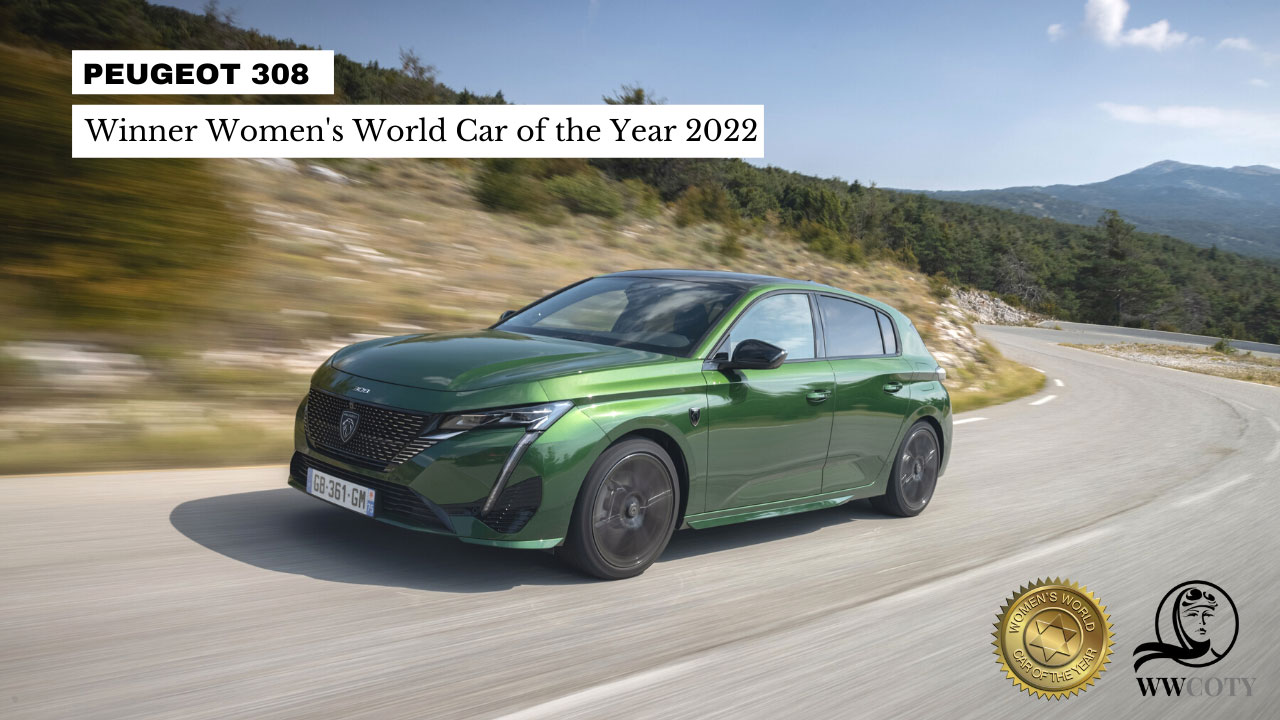 The new PEUGEOT 308 has been declared “Women’s World Car of the Year 2022”, after an astounding vote from the 56 female members of the WWCOTY (Women Worldwide Car of The Year) jury. The PEUGEOT 308 won ahead of 65 new models launched in 2021 that had entered the competition.
The title of “Women’s World Car of the Year” is contested over two rounds: the first round ends with the voting of the winning models in the six categories. On February 14th, the PEUGEOT 308 was named “Urban and Compact Car of the Year 2022” by the 56 female automotive journalists who make up the jury. The 308 was then voted Supreme Winner of the “Women’s World Car of the Year” from among these six finalists, thus winning the coveted prize ahead of all its competitors around the world. The title goes to the two silhouettes of the new PEUGEOT 308: the saloon and the SW estate.
This is the first time that PEUGEOT has received this award, whose global vocation echoes the brand’s strong desire to develop internationally. The first PEUGEOT to bear the Brand’s new emblem, the new 308 stands apart through its design, technology, and wide array of efficient engines and proudly carries the values of PEUGEOT: Allure, Excellence and Emotion.
Linda Jackson, CEO of the PEUGEOT brand, said: “I am very proud of the WWCOTY award given to the new PEUGEOT 308, and I congratulate all the PEUGEOT teams for this success. The new 308 won for all its qualities, but also because it covers a large part of the uses of the millions of potential users in the countries represented by the Women’s World Car of the Year jurors. Whatever their needs, habits, means and aspirations, they can find in the 308 range the vehicle that suits them: attractive, efficient, functional and accessible.”
The new PEUGEOT 308 is the first PEUGEOT model to win the supreme title of Women’s World Car of the Year since the trophy was created in 2009. PEUGEOT has been honoured several times at the WWCOTY for other awards; most notably in 2017 with the victory of the PEUGEOT 3008 in the SUV category and in 2021 with the victories of the PEUGEOT 208 and 2008 in the Urban Vehicle and Urban SUV categories.
Reham El Didi, Head of Corporate Communications at Stellantis, said: “We are delighted that the PEUGEOT 308 has won such a coveted award. Since its inception in 2009, the WWCOTY is the only automotive award in the world that is judged exclusively by female automotive journalists via rigorous voting criteria. This award is a testament to PEUGEOT’s new feel over the last few years as brand that has safety, quality, design, technology and more at the forefront of everything it does. I look forward to an exciting future for the brand in the years to come.”
The new PEUGEOT 308 is equipped with the latest generation of driving aids. The PEUGEOT i-Cockpit® (compact steering wheel, digital handset at eye level, central touchscreen with configurable buttons) has evolved and now includes a connected and intuitive infotainment system, like that of a smartphone.