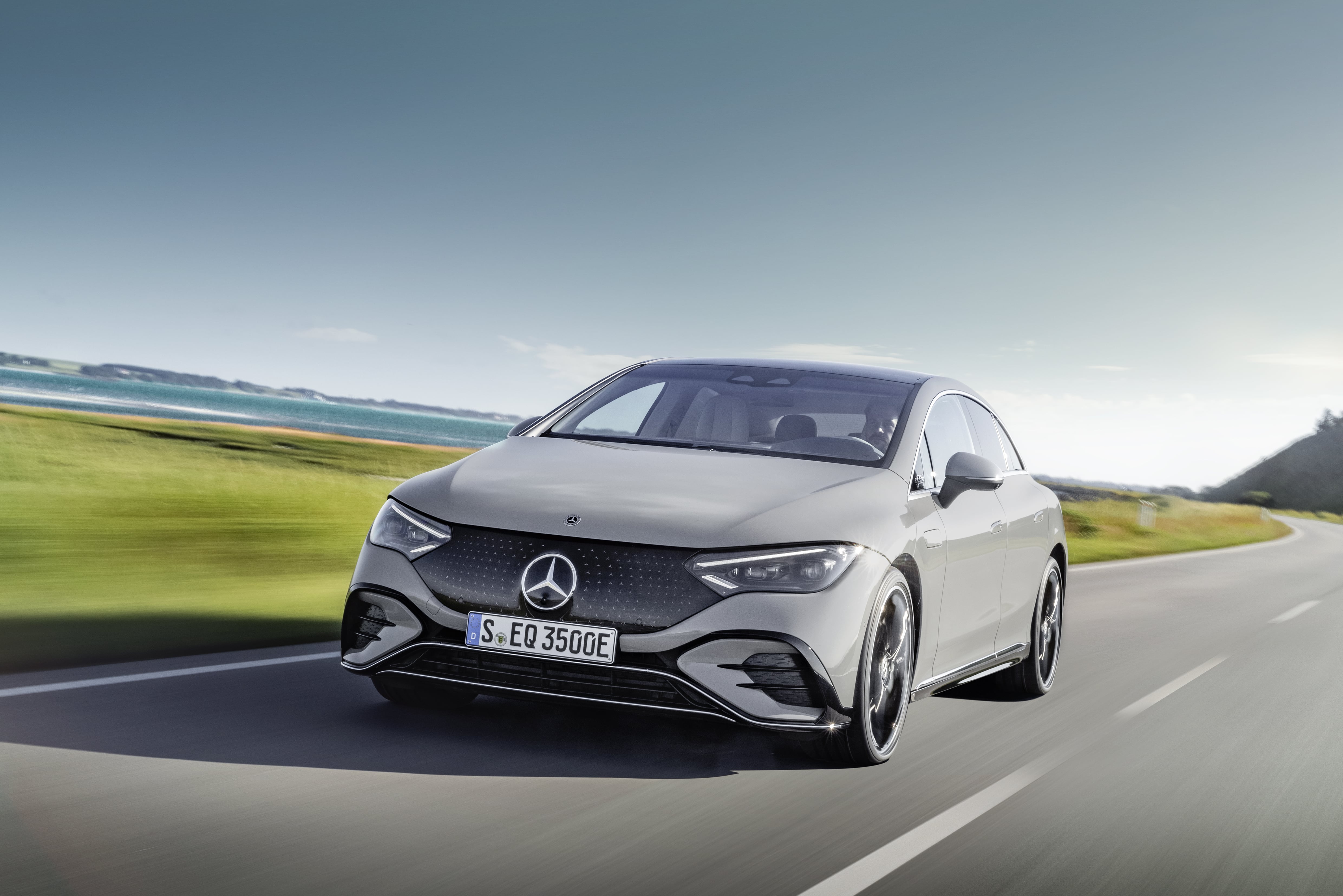 Just a few months after the launch of the EQS, Mercedes-EQ is already presenting the next model based on the electric architecture developed specifically for electric vehicles, the new EQE. The sporty business saloon offers all the essential functions of the EQS in a slightly more compact format. At market launch, the model range initially comprises two variants: the EQE 350 (power consumption acc. to WLTP: 19.3-15.7 kWh/100 km; CO2 emissions: 0 g/km)[1] with 215 kW, as well as another model. Performance variants with around 500 kW are being planned. Production of the EQE takes place at two locations of the Mercedes-Benz Cars global production network: at the German Mercedes-Benz plant in Bremen for the global market and at the German-Chinese joint venture BBAC in Beijing for the local market.

Compared to the luxury liner EQS, the EQE is even more streamlined, with a slightly shorter wheelbase, shorter overhangs and more recessed flanks – it carries the concept of the business saloon into the future. Sensual Purity is reflected in generously modelled surfaces, reduced joints and seamless transitions (seamless design). The overhangs and the front end are kept short, the rear provides the dynamic accent with a sharp rear spoiler. Flush with the outer edge of the body, the 19- to 21-inch wheels, together with a pronounced muscular shoulder section, give the EQE an athletic character.

In the outer dimensions (length/width/height: 4946/1961/1512 millimetres), the EQE is comparable to the CLS. Like the latter, it has a fixed rear window and a boot lid. The interior dimensions even clearly exceed those of today’s E-Class (213 model series), e.g. the shoulder room in the front (plus 27 mm) or the interior length (plus 80 mm).

With the optionally available MBUX Hyperscreen, the entire instrument panel is a single, ultimate widescreen. This determines the aesthetics of the entire cockpit and interior. The high-resolution screens merge seemingly seamlessly under the shared glass cover. The graphic appearance of their MBUX content is perfectly coordinated. The MBUX Hyperscreen is integrated into the instrument panel in minimalist fashion.

The 12.3-inch OLED display for the front passenger gives them their own display and control area. In Europe, the passenger is allowed to watch dynamic content such as videos, TV or internet even when on the move. This is because Mercedes-EQ uses an intelligent, camera-based blocking logic: if the camera detects that the driver is looking at the front passenger display, this is automatically dimmed for certain content.

The vent band spans across the entire width at the top and is very slim at the same time. These extreme proportions, together with the glass wave of the MBUX Hyperscreen, create the avant-garde architecture of the cockpit. The outer nozzles feature a turbine design. They play on the theme hyperanalogue through the contrast between high-tech precision mechanics and digital, glass display world.

The latest MBUX generation, recently introduced in the EQS, is also on board the EQE. With adaptive software, the control and display concept completely adapts to its user and makes personalised suggestions for numerous infotainment, comfort and vehicle functions. With the zero-layer design, the user does not have to scroll through submenus or give voice commands. The most important applications are offered situationally and contextually on the top level in the field of view. In this way the EQE driver is relieved of certain operating steps.

The EQE 350 with 215 kW plus a second model will be launched first. Further versions will follow. All EQE models have an electric drivetrain (eATS) on the rear axle. The later versions with 4MATIC are also equipped with an eATS at the front axle. The electric motors are permanently excited synchronous motors (PSM). With the PSM, the rotor of the AC motor is fitted with permanent magnets and therefore does not need to be supplied with power. The advantages of this design include high power density, high efficiency and high power constancy. The motor on the rear axle is particularly powerful due to its six-phase design: it has two windings with three phases each.

In the EQE, the lithium-ion battery consists of ten modules and has a usable energy content of 90 kWh. The innovative battery management software, developed in-house, allows updates over the air (OTA). In this way, the energy management of the EQE remains up-to-date throughout the life cycle.

In the case of the battery, a major step has been achieved in terms of the sustainability of the cell chemistry: the optimised active material consists of nickel, cobalt and manganese in a ratio of 8:1:1. This reduces the cobalt content to less than ten percent. The continuous optimisation of recyclability is part of Mercedes-Benz’s holistic battery strategy.

Consistently high performance and multiple accelerations without a drop in power characterise the EQE’s drive philosophy. This includes a sophisticated thermal concept and several variants of energy recovery by means of recuperation. in this process, the high-voltage battery is charged by converting the mechanical rotary motion into electrical energy during overrun or braking mode. The driver can manually select the deceleration in three stages (D+, D, D–) as well as the gliding function via shift paddles behind the steering wheel. Also available: DAuto.

ECO Assist also offers situation-optimised recuperation – deceleration is so strong or weak that it ultimately results in the most efficient driving style. If possible, recuperative deceleration is also used for vehicles detected ahead. This even occurs until they come to a standstill, for example at traffic lights. The driver does not need to press the brake pedal for this – literally one-pedal driving.

Navigation with Electric Intelligence plans the fastest and most convenient route, including charging stops, based on numerous factors and reacts dynamically to traffic jams or a change in driving style, for example. This includes a visualisation in the MBUX infotainment system as to whether the available battery capacity is sufficient to return to the starting point without charging.

High noise and vibration comfort, Sound Experiences as a contrast

As a saloon with a boot lid, the EQE’s concept is well equipped to offer a high level of NVH comfort Noise, Vibration, Harshness) into account. Numerous measures contribute to this. In the electric drivetrains (eATS), the magnets are arranged inside the rotors in an NVH-optimised way (known as ‘sheet metal cut’). In addition, the eATS have a special foam mat all around as an NVH cover. The inverter cover is a sandwich construction. The eATS are double-decoupled from the body via elastomeric bearings:

Highly effective spring/mass components provide continuous sound insulation from the crossmember under the windscreen to the floor of the boot. Acoustic foams are inserted into many carriers during body-in-white construction.

If desired, the ride in the EQE nevertheless becomes an acoustic experience: If the Burmester® surround sound system is on board, the EQE has the two soundscapes: Silver Waves and Vivid Flux. Silver Waves is a sensuous and clean sound. Aimed at EV enthusiasts, Vivid Flux is crystalline, synthetic yet humanly warm. They can be selected or switched off as sound experiences on the central display. The additional soundscape Roaring Pulse can be activated as an over-the-air update. This sound experience is reminiscent of powerful machines, and is sonorous and extroverted.

The suspension of the new EQE, with four-link front suspension and multilink rear suspension, is closely related in design to the new S-Class. As an option, the EQE is available with AIRMATIC air suspension with ADS+ adaptive damping system. With rear-axle steering (optional extra), the EQE feels as manoeuvrable as a compact car in the city. The steering angle at the rear axle is up to ten degrees. The turning circle is reduced from 12.5 to 10.7 metres with rear-axle steering.

New vehicle functions can be activated via over-the-air technology (OTA). Available from launch: the additional sound experience “Roaring Pulse”, two special driving modes for young drivers and service personnel, small games, the highlight mode as well as DIGITAL LIGHT with projection function and DIGITAL LIGHT individualisation. In Highlight mode the vehicle presents itself and its equipment highlights – this is activated by the “Hey Mercedes” voice assistant. In addition to the light animation “Digital Rain”, DIGITAL LIGHT individualisation includes other coming-home/leaving animations such as “Brand World”. The OTA functions are available in the Mercedes me Store, and the range will be successively expanded.

What’s more, Mercedes me Charge customers continue to benefit from the integrated payment function with automatic payment. The customer chooses the preferred payment method only once. Every charging process is then automatically debited – including abroad. The individual charging processes are clearly listed in a monthly invoice.

Mercedes me Charge is one of the largest charging networks worldwide: it currently has more than 530,000 AC and DC charging points in 31 countries, including over 200,000 in Europe. By means of high-quality certificates of origin, Mercedes-Benz guarantees that energy from renewable energy sources is fed into the grid for charging current sourced via Mercedes me Charge.

The principles of Integral Safety, in particular accident safety, apply regardless of the platform. Like all other Mercedes-Benz models, the EQE therefore has a rigid passenger cell, special deformation zones and modern restraint systems with PRE-SAFE®.

The fact that the EQE is based on an all-electric architecture also opened up new design possibilities for its safety concept. It meant, for example, that a favourable location could be chosen for the installation of the battery, in a crash-protected area in the underbody. And because there is no large crankcase on board, the behaviour in a frontal crash could be modelled even better. In addition to the standard crash tests, the car’s performance in various additional load situations was verified and extensive component tests carried out at the Vehicle Safety Technology Centre (TFS).

Data on power consumption and range are provisional and were determined internally in accordance with the “WLTP test procedure” certification method. Confirmed TÜV figures, EC type approval and certificate of conformity with official figures are not yet available. Differences between the stated figures and the official figures are possible.

Technical data of the EQE regarding consumption, range, power, torque, recuperation as well as performance in this publication are preliminary and have been determined internally in accordance with the applicable certification method. Figures for power consumption and operating range are provisional, and were measured internally in accordance with the certification method “WLTP test procedure”. Confirmed TÜV figures, EC type approval and certificate of conformity with official figures are not yet available. Differences between the stated figures and the official figures are possible.