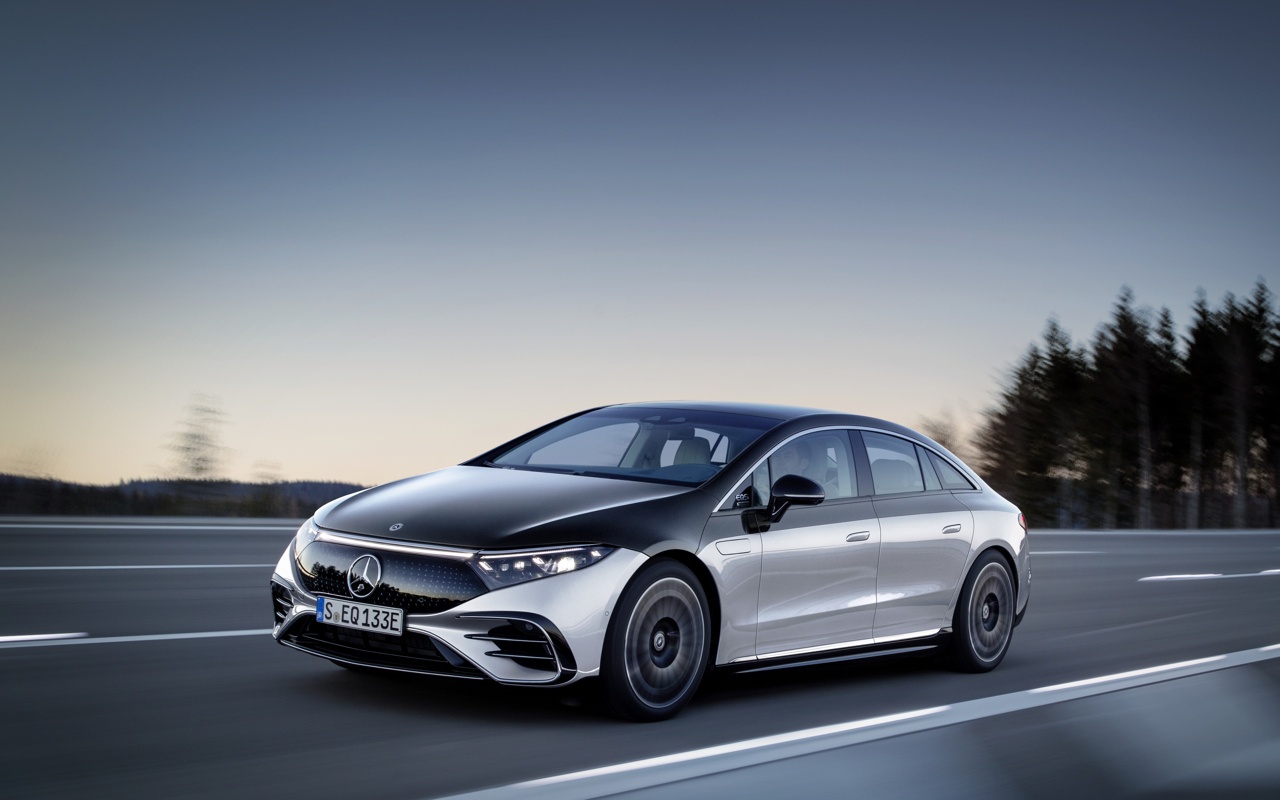 The EQS, the first electric vehicle in the luxury class, Makes Middle East Debut at GITEX 2021

The EQS, the first all-electric luxury sedan from Mercedes-EQ, marks its Middle East debut at the region’s biggest tech show, GITEX Global 2021 from 17 to 21 October. With it, Mercedes-EQ is redefining the electrical vehicle segment.The EQS is the first model to be based on the modular architecture for luxury and executive-class electric vehicles. Fusing technology, design, functionality and connectivity, the EQS delights both drivers and passengers.

As part of its Ambition 2039 initiative, Mercedes-Benz is working on offering a carbon-neutral new car fleet within 20 years from now. By as early as 2030, the company wants more than half the cars it sells to feature electric drive systems – this includes fully electric vehicles and plug-in hybrids. In many areas, Mercedes is already thinking about tomorrow today: the new EQS is designed to be correspondingly sustainable. The vehicles are produced in a carbon-neutral manner, and resource-saving materials such as carpets made from recycled yarn are used. This is because Mercedes-Benz considers the entire value chain, from development and the supplier network to its own production. Mercedes-Benz AG has had its climate protection targets confirmed by the Science Based Targets Initiative (SBTI).

With a great deal of meticulous detailing and on the basis of the Purpose design, the aerodynamicists, in close cooperation with the designers, were able to achieve a new cd best value of 0.20[1]. This makes the EQS the most aerodynamic production car in the world. The operating range particularly benefits from this. It is also among the best in terms of quiet running. The very low wind noise level contributes significantly to this.

The EQS also currently sets a very good value for recuperation: Of the maximum deceleration in the DAuto recuperation program of 5 m/s², up to 3 m/s² is achieved by recuperation (2 m/s² by the wheel brakes). This allows decelerating to a standstill without using the brake pedal, while at the same time the range benefits from this recuperation strategy and the high recuperation power (up to 290 kW[2]). Deceleration is also applied to detected

[2] This value refers to the electrical power fed into the electric battery due to recuperation. It can be achieved under optimal environmental conditions, depending on, among other things Charge status and temperature. Deviations are possible.

Interesting facts & figures
The new EQS: at a glance
Depending on the size of the battery and the vehicle equipment and configuration, WLTP ranges of up to 785 kilometres are possible.
The path to the aerodynamics world record of the EQS required several 1000 calculation runs in the virtual wind tunnel with approx. 700 CPUs per calculation. With a cd figure from 0.20 the EQS is the world’s most aerodynamic production car. The frontal area of the EQS is 2.51 m2. This results in an effective air resistance from 0.5 m².
The momentum delivered to the wheels by the eATS is checked 10,000 times per minute and set if necessary. This enables a much faster response in the versions with 4MATIC than with mechanical all-wheel drive.
The modular drive concept allows a wide range of maximum total drive powers from 245 to 385 kW. A performance version with up to 560 kW is being planned.
Of the maximum deceleration in the DAuto recuperation program of 5 m/s², up to 3 m/s² is achieved by recuperation (2 m/s² by the wheel brakes). This allows decelerating to a standstill without using the brake pedal, while at the same time the range benefits from this recuperation strategy and the high recuperation power (up to 290 kW ).
On request, the EQS has four automatic comfort doors . Via MBUX, the driver has the option of opening the rear doors remotely and letting children get in at school, for example.
The standard rear-axle steering with a steering angle of up to 4.5° contributes to the handy and dynamic impression of the EQS. Alternatively, rear-axle steering with a steering angle of up to 10° can be ordered or subsequently activated by an upgrade over the air (OTA). This enables a turning circle of 10.9 metres for the EQS, which is over five metres long.
DIGITAL LIGHT has a light module with three extremely powerful LEDs in each headlamp, whose light is refracted and directed by 1.3 million micro-mirrors. The resolution is therefore more than 2.6 million pixels per vehicle.
Mercedes me Charge has the densest charging network with over 500,000 charging points in 31 countries, including over 200,000 in Europe.
With the MBUX Hyperscreen, multiple displays merge seamlessly to create an impressive curved screen band over 141 centimetres wide. The area perceived by the occupants measures 2432.11 sq. cm.
The large glass covering the MBUX Hyperscreen is curved in three dimensions in a moulding process at temperatures of approx. 650°C. This process allows a distortion-free view of the display unit across the entire width of the vehicle, irrespective of the radius of the glass cover.
Depending on the equipment, up to 350 sensors monitor the functions of the EQS or peer into the vehicle’s surroundings. And that’s not even counting the antennas. The sensors record, for example, distances, speeds and accelerations, lighting conditions, precipitation and temperatures, the occupancy of seats as well as the driver’s blink of an eye or the passengers’ speech.
The optional driving sound of the EQS is interactive and reacts to a good dozen different parameters such as the position of the accelerator pedal, speed or recuperation.
No.6 MOOD Linen is the name of the fragrance composed especially for the EQS. It bears the number 6 because the first electric cars were added to the model range in 1906 with the “Mercédès Electrique” vehicles.
More than 40 new inventions have found their way into EQS. In addition, 20 design applications protect the extraordinary design of the electric luxury sedan.
To get to the most important applications of MBUX, the user has to scroll through 0 menu levels. That’s why it’s called a zero layer.
The display area of the optionally available larger head-up display corresponds to a screen with a diagonal of 77 inches. The imaging unit consists of a high-resolution matrix of 1.3 million individual mirrors.
The “Mercedes-Benz pattern” is used in several places in the EQS, for example, in the exterior as a special variant of the Black Panel front or in a light-alloy wheel design. In the interior, the Mercedes-Benz pattern can be found in the backlit trim elements with laser-cut or on the front passenger display as a digital decorative image. It is an abstracted, three-dimensional star pattern based on an early trademark of the Daimler Motorengesellschaft (DMG), which was entered in the trademark registry on 9 February 1911.
The HEPA filter (High Efficiency Particulate Air) as part of the optional equipment ENERGIZING AIR CONTROL Plus with a volume of 9.82 dm³ cleans the incoming outside air at its very high filtration level. Over 99.65 percent of particles of all sizes are eliminated. Around 600 grams of activated charcoal are used to neutralise odours. The adsorption area is equivalent to about 150 football fields.
For haptic feedback during operation, a total of 12 actuators are located under the touchscreen surfaces of the MBUX Hyperscreen. If a finger touches certain spots there, they trigger a tangible vibration in the cover plate.
The Burmester® surround sound system in the EQS comprises 15 speakers with a total output of 710 watts and produces an unusually expressive, natural sound – the Burmester “feel-good sound”.
A coating on the cover glass simplifies cleaning of the MBUX Hyperscreen. The curved glass itself consists of particularly scratch-resistant aluminium silicate.
The EQS is the first production car with a cd value starting from 0.20 . In this way, it makes use of the advantages of the Purpose Design.
8 CPU cores, 24 GB RAM and 46.4 GB per second RAM memory bandwidth are some of the MBUX technical data.
The brightness of the MBUX Hyperscreen’s screen is adjusted to the ambient conditions using the measurement data from 1 multifunction camera and an additional 1 light sensor.
With up to seven profiles, the display area of the MBUX Hyperscreen for the front passenger can be individualised (only available in Dubai and Abu Dhabi).