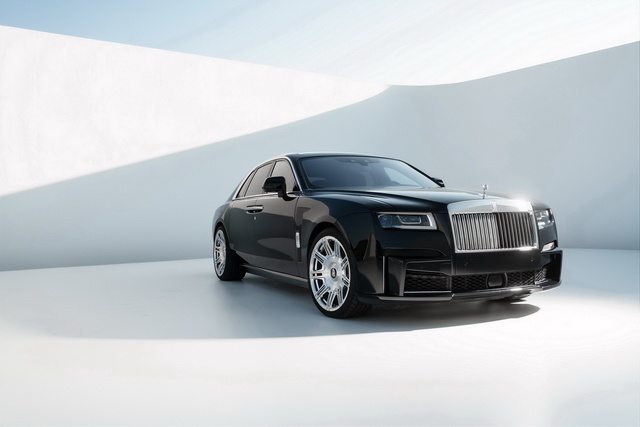 The new Ghost is arguably the sportiest interpretation of a Rolls-Royce sedan ever. And thus an excellent starting point for the designers and technicians of SPOFEC, a NOVITEC GROUP Company. This brand exclusively refines cars with the Spirit of Ecstasy hood ornament, whose first letters make up the SPOFEC brand name.

The company also has developed a customization range for the British four-door car, which gives the Ghost even greater driving dynamics and an even more extravagant appearance.

To match the improved driving dynamics, SPOFEC gives the new Ghost an even more athletic design with carbon bodywork components that feature sporty and elegant styling. SPOFEC forged wheels with a diameter of 22 inches developed in cooperation with US rim manufacturer Vossen fill out the wheel wells perfectly. The SPOFEC suspension module lowers the ride height of the luxury sedan by about 40 millimeters.

A standard peak output of 420 kW / 571 hp and 850 Nm of torque mean that there are quite a few reserves slumbering in the 6.75-liter twin-turbo V12 engine of the Rolls-Royce Ghost. The optimal fertile ground for the SPOFEC engine specialists who adapt a plug-and-play N-TRONIC module to the electronic engine control unit. It introduces new mapping for injection and ignition, which SPOFEC programmed in a complex series of tests, and moderately increases the boost pressure.

As a result, the output of the twelve-cylinder jumps to 504 kW / 685 hp at a low 5,400 rpm. At the same time, peak torque grows to 958 Nm. This also improves the pulling power in daily driving and the acceleration figures. The enhanced luxury sedan shoots from rest to 100 km/h in just 4.5 seconds. Due to the high vehicle weight, the electronic speed limitation to 250 km/h remains unchanged.

SPOFEC optionally underscores these significantly improved dynamics with a more thrilling sound as well. To this end, the company developed a stainless sport exhaust with actively controlled exhaust flaps. It enables the driver to select either a decidedly discreet or a very powerful exhaust note from inside the cockpit by remote control.

The SPOFEC designers were tasked to give the Rolls-Royce Ghost a sporty-elegant touch. To do so, they developed tastefully styled and aerodynamically efficient bodywork components for both wheelbase variants of the Ghost. The components are produced from lightweight yet high-strength carbon.

The new SPOFEC front fascia characterizes the fresh face for the Rolls-Royce. Large air intakes give it a visually striking appearance. What is more: It also reduces front-axle lift at high speeds and thus further optimizes the directional stability. The new aerodynamic-enhancement component optionally also comes with LED position markers and perfectly transitions to the likewise new SPOFEC front fenders. These fenders feature a distinctive air outlet behind the wheel arch on either side.

The SPOFEC rocker panels come in tailor-made versions for the Ghost models with short or long wheelbase. They give the British four-door car an even lower and sleeker visual stance. SPOFEC also gives the rear view an athletic upgrade with a new rear fascia and spoiler lip.

Wheels make or break a car and consequently the SPOFEC specialists developed hi-tech forged wheels for the new Ghost, which are produced by Vossen, one of the world’s leading manufacturers in this field. Nine pairs of twin-spokes extending all the way to the outer flange characterize the SPOFEC SP2 design, which is pictured here in the silver polished variant. In sizes 9.5Jx22 at the front and 10.5Jx22 on the rear axle, they carry tires of sizes 265/35 ZR 22 and 295/30 ZR 22 and optimally fill out the available space under the wheel arches.

The SPOFEC CAN-Tronic suspension module is specifically calibrated to work with the 22-inch tires. At speeds up to 140 km/h, the new programming of the Ghost’s air suspension lowers the vehicle by about 40 millimeters compared to the production car. At higher speeds, the vehicle body automatically reverts to the standard level.

Another option that SPOFEC realizes at the highest level of quality is exclusive interior refinement, which turns the personal wishes of the particular vehicle owner into a reality in every detail.