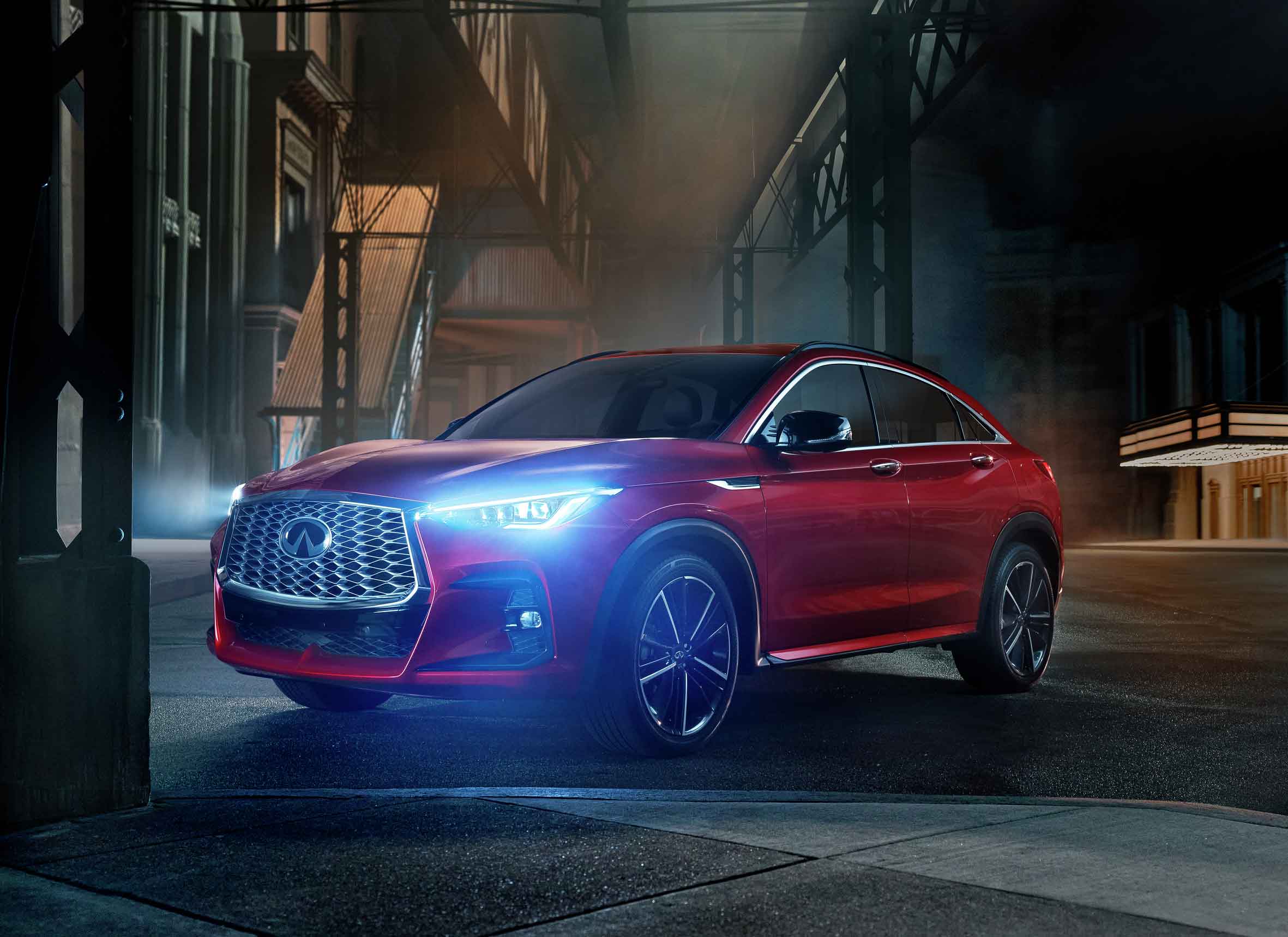 Lights up, cameras on, and sound rolling, INFINITI today launched the all-new QX55 SUV via a one-of-a-kind streaming concert experience from Los Angeles. The INFINITI QX55 is the spiritual successor to another one-of-a-kind moment: the INFINITI FX. Like its predecessor, the QX55’s daring roofline and unapologetic shape are in tune with equally bold buyers; the QX55 doesn’t have something for all people — it aims to be everything to some people.

“The new INFINITI QX55 is a statement-maker, designed to deliver first-class comfort and stand out everywhere it goes. It’s a unique fusion of style and substance” said INFINITI Chairman Peyman Kargar.

The show-stealing QX55 was unveiled by global superstar Aloe Blacc, whose music connects to INFINITI with its verve and unmistakable sound. Known for his standout hits, “The Man,” “Wake Me Up,” and “I Need A Dollar,” Blacc’s performance set the table for a new era of exciting vehicle reveals. Blacc’s performance in the iconic Belasco Theater in Los Angeles married to immersive discussions with Senior Vice President of Global Design Alfonso Albaisa and INFINITI’s General Manager, Product Strategy and Planning Eric Rigaux in Tokyo, and brand chief Kargar’s introduction to the star-studded night, produced with Live Nation.

“The all-new INFINITI QX55 is classy. It just looks sleek, and it feels like it’s quality. Ultimately, the only thing I ever want to engage with is quality. From the musicians that I pick, to the food that I eat, to the car that I drive. I like to know that something is crafted with intention and purpose and that there’s quality behind every measure of it,” Blacc said.

The QX55’s design retains all of INFINITI’s daring design hallmarks, delivering a fresh interpretation of the FX silhouette. The QX55 inserts INFINITI back into a category it helped to create with an unapologetic style. The signature double-arch grille is complemented by a stunning, origami-inspired mesh pattern that delivers visual depth and showcases modern Japanese-inspired artistry. Flanked by standard LED headlights that mimic the human eye, the QX55 announces its arrival in style.

Along the body sides, the QX55’s alluring profile has plenty to say but doesn’t speak out of turn. The elegant and flowing lines reach from the hood, over the front fenders, across the doors, and over the rear wheels. Twenty-inch wheels are standard on all QX55 models, which fill the wheel arches and assert the SUV’s dynamic presence.

The rear of the QX55 accentuates the subtlety of the automaker’s design and interpretation of Japanese minimalism by coupling an uncluttered liftgate with handsome, understated technology to deliver a lasting impression. Digital “piano key” taillights combine 45 separate LEDs in a single housing to create an elegant light signature, recently featured on the stunning QX60 Monograph design study. The INFINITI logo on the tailgate is similarly advanced and houses the power liftgate release, which further frees the rear end from clutter.

Leatherette, leather, or semi-aniline leather appointments for the seats adorn the QX55’s spacious interior, and its sliding second-row seats provide flexible cargo capacity or increased legroom, depending on need.

Under the hood of every QX55 is INFINITI’s award-winning and innovative Variable Compression Turbo four-cylinder engine that makes 268 horsepower and 380 Nm of torque. The dynamic engine imperceptibly changes its compression and displacement to deliver enhanced efficiency or on-demand power, based on the driver’s needs. That power is shifted through a confident Continuously Variable Transmission with manual shift mode and delivered to INFINITI’s Intelligent All-Wheel Drive system, which is standard on all QX55 models. A Drive Mode Selector empowers the driver with programmable settings (Standard, Eco, Sport and Personal) to tailor each drive.