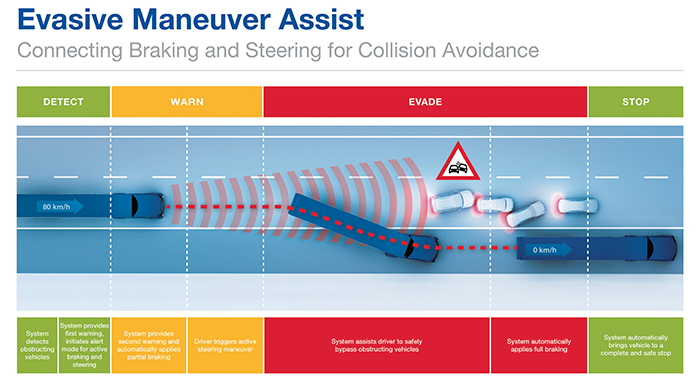 WABCO has recently surprised people in the automotive world with the prototype of a breakthrough collision avoidance technology for commercial vehicles. Jointly developed with ZF, the Evasive Maneuver Assist (EMA) merges WABCO’s world-class stability, braking and vehicle dynamics control systems on trailers and trucks with ZF’s top active steering technology, which is an industry first.

Based on the core competencies of the two companies, EMA controls both the lateral and longitudinal movements of heavy-duty trucks and trailers in tough driving situations at high-speed, hence, helping to prevent rear-end collisions. Dangerous driving situations may include driving on wet, low friction road surfaces or traffic jams that appear suddenly after curves.

According to Jacques Esculier, Chairman and Chief Executive Officer, WABCO, the demonstration of the Evasive Maneuver Assist prototype is a powerful example of WABCO’s and ZF’s leadership in the development of advanced safety technologies for commercial vehicles. He said that EMA connects WABCO’s braking and stability control systems with ZF’s active steering solution for the very first time and marks a significant step toward the realization of the transportation industry’s vision of autonomous driving.

Dr. Stefan Sommer, Chief Executive Officer, ZF Friedrichshafen AG, said in a statement that he is thrilled that ZF and WABCO teamed up to combine their world-class steering and braking technologies to develop a new collision avoidance functionality for commercial vehicles. He added that Evasive Maneuver Assist is yet another industry leading innovation that has the potential to considerably advance commercial vehicle and road safety around the world.