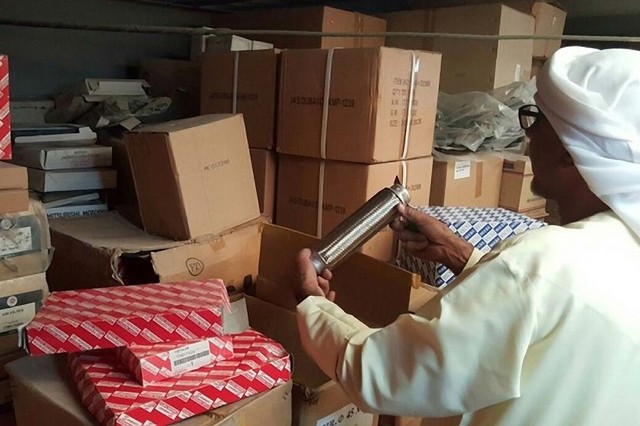 In a raid that was conducted on a warehouse in al Ain, the Abu Dhabi Department of Economic Development seized AED 15 million worth of fake spare parts. The raid was based on the outcome of an investigation that was conducted over a period of eight months by the department into the activities of a major distributor of spare parts in the country.
It seems that the Syrian who was the kingpin of the fake spare parts racket has been selling such products for the past six years. He usually imported the shipments of these fake spare parts through Khor Fakkan port, on the east coast, rather than Jebel Ali port or Port Rashid where inspection is more rigorous. The shipments would be moved to the warehouse in Al Ain, which functioned as a hub for distribution of the parts to vehicle traders.

Inspectors from the Department of Economic Development found 21 lorries which were loaded with fake parts for renowned brands like Toyota, Volkswagen, Nissan, Porsche and BMW and Mercedes-Benz, as well as other brands when they raided the warehouse. About 50 per cent of the parts that were seized during the raid were for Toyota vehicles.
Speaking about the raid, Ahmed Al Qubaisi, the department’s commercial protection director said that car parts are used by almost everyone and the company had strengthened its efforts to seize fake parts to enhance the safety of the public. Though he failed to identify the name of the distributor, he confirmed that the fake parts are currently being withdrawn from the market by the companies which had purchased them.

Mohamed Munif Al Mansouri, acting executive director of the department’s Abu Dhabi Business Center, said the seizure of fake parts at one of the biggest warehouses in Al Ain was made after inspectors worked closely with car makers. He said that all the confiscated items would be destroyed and the warehouse will face closure.

Advocate Hatem Abdelghani, partner and director of the IP department at The Legal Group, said that the department began investigations when documents were found at warehouses that the distributor had sold the fake parts to. The department will be proceeding with legal action against all shops and retailers who had sourced fake parts from the Syrian distributor. He estimated that about 30 shops in Al Ain and Abu Dhabi had purchased fakes. According to Ahmed Al Qubaisi, the penalties for selling fake parts range
Mr Al Qubaisi said the penalties which would be imposed on distributors and sellers for selling counterfeit products range from fines and prison to the closure of a company. Mr. Abdelghani said the seizure was the largest such haul in Abu Dhabi. He said that business is Abu Dhabi is normally focused on consumers and retailers. It does not serve as a hub for import like Dubai and Sharjah. Hence, such a haul was highly unusual. He urged consumers not to focus only on price when buying fake parts as they would be compromising their safety when they buy fake parts. They should instead buy parts directly from certified dealers.