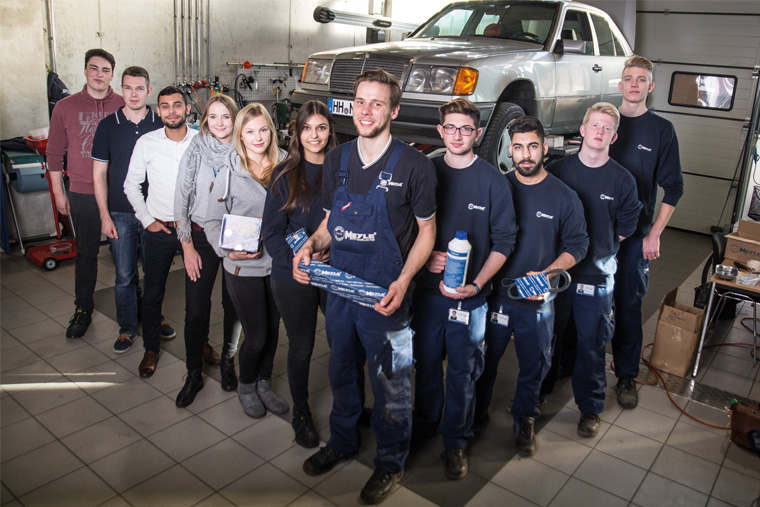 Meyle Business Administration trainee, Niklas Arndt showcased the high quality of Meyle spare parts by participating in the 3000 kilometer “Dust & Diesel” journey spanning two continents and five countries. Over a period of 16 days, he travelled in his Mercedes Benz W124 from Spain across Morocco and Mauritania to Senegal on the west coast of Africa, which he reached on 15 January, 2017. Before he set out on his arduous trip, Arndt joined other MEYLE AG trainees in a collaborative project to completely overhaul and prepare his vehicle for the trip, using Meyle spare parts. Some of the Meyle parts used for the overhaul of the Mercedes-Benz W 124 included top-grade glow plugs, engine mounts, suspension strut bearings, shock absorbers and control arms.

After the rally ended, the 30 vehicles which participated in the event were auctioned off for a good cause, and the proceeds amounting to over 25,000 euros were donated to a German-Mauritanian charity project that provides support to deprived children (www.aepn.de).

Niklas Arndt started his journey on December 28, 2016 from Tarifa in Spain and as part of the first stage, each participant had to find his own way to Fez, the second largest city in Morocco. The lack of street signs in Tangier was confusing. He reached Fez before sunset on the first day after taking a short break in the beautiful Rif mountains. After resting for one day, he moved on to Marrakesh in really cold weather and drove for 500 kilometers across the Middle Atlas range to reach Marrakesh. Driving was a bit challenging as it involved a large number of switchbacks with many blind spots. After another rest day in Marrakesh, his team crossed the Tizi N’Test pass in the High Atlas ranges, negotiating steep roads to reach Fort Bou Jerif, some 30 kilometres from Guelmim, in the middle of the desert.

On the sixth day, the vehicles participating in the rally formed a convoy to cross a dry riverbed and rocky terrain. The downhill sections were tough to negotiate and proved to be a true challenge for his car. They then reached the Atlantic Ocean and followed the coastline to pass Tan-Tan, which is known as “the gateway to the Sahara desert”. Then on, they had to negotiate sand drifts, which made their vehicle skid a little.

On the seventh day, they covered 500 kilometres across the western part of the Sahara desert. About halfway through this leg of the journey, Arndt heard a sudden clicking noise caused by a defective injector nozzle. This slowed them down and they drove slowly to Dakhla, where the problem was easily fixed. Many other cars participating in the rally had minor and major technical issues and they used the subsequent rest day to get these sorted.

On the ninth day, Arndt’s team drove Nouadhibou close to the Mauritanian border. After crossing into Mauritania the next day, they visited the children’s charity in Nouadhibou, which benefited from the proceeds of the car auction The children’s center provides children from 3 to 14 years of age with assistance for tuition, sports events, meals and teaching.

The 11th day marked the team’s first-ever off-road venture into the desert, when they left the road after travelling for 200 kilometres. They reduced tire pressure to 1 bar, and went in a loose convoy. They had to use all their driving skills to avoid getting buried in the sand.

The next leg of the rally on the 12th day involved going towards the ocean across a succession of deep sand beds. They waited for low tide at a small fishing village to cross a dune and reach the beach. They spent the next 75 kilometers driving on a road between the desert and the endless waters of the Atlantic Ocean.

On the 14th day, they reached they followed the coast for another 30 kilometers to reach Nouakchott, their   final destination. It was here that the cars auctioned off for charity to benefit the AEPN children’s centre. Arndt’s MEYLE Mercedes fetched 1,000 euros. The proceeds raised from the auction of all the cars will support the Mauritanian children’s center for a whole 8 months.

The team handed the car over to the buyers after crossing one of the most dangerous sections of the Western Sahara desert and driving to St. Louis