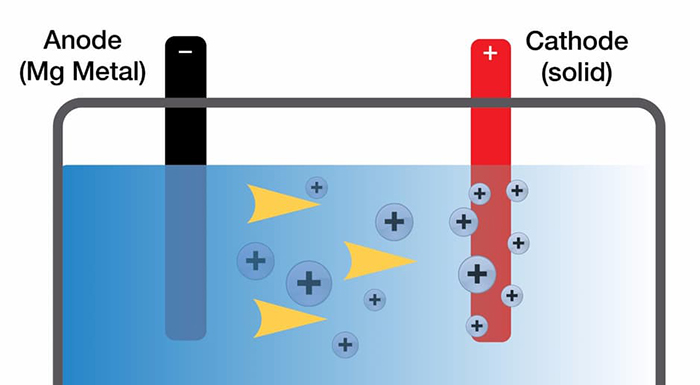 It seems that engineers at the Toyota Research Institute of North America (TRINA) have already found the secret to utilizing magnesium in rechargeable batteries. They say that it might soon substitute lithium as a safer and more energy-dense option for batteries in everything from cell phones to cars.

For some time, magnesium has been regarded as a potential substitute for lithium in rechargeable batteries. Lithium is unstable in air and can combust when exposed, so to make Li-ion batteries safer, the ions are decreased and the lithium is embedded into graphite rods. As a result, this cuts down the amount of metal, which in turn restricts the amount of power the Li-ion battery can store. In order to increase density, engineers have considered the blend of graphite and lithium and the shape of the cells, but the balance is complex.

On the other hand, magnesium is stable in the atmosphere and more potentially energy dense than is lithium when it comes to storage. The problem is, forming an electrolyte that does not degrade the magnesium while providing efficient transfer had proven challenging—until a chance discovery during research into hydrogen fuel cells changed that.

After overhearing her colleagues discussing the challenges in magnesium-friendly electrolyte development, principal scientist and chemical engineer Rana Mohtadi of Toyota realized that the properties of the hydrogen storage material she had been working with might be beneficial to a magnesium-based battery. Hence, they formed a team to test it.

Paul Fanson, manager for Toyota’s research group, ascribes the discovery to the persity of the research team at TRINA and the cooperative nature of the facility’s culture.

To help other researchers outside of Toyota speed up the development of usable magnesium-based batteries, the team has produced a paper outlining their discovery, which was published in the Angewandte Chemie International Edition.