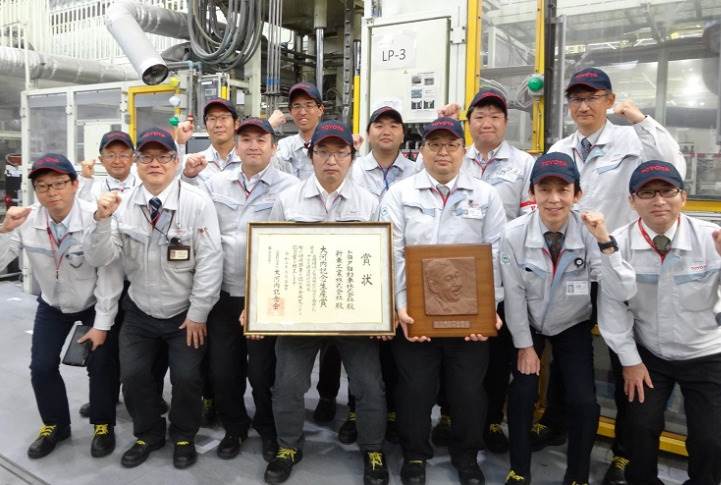 Toyota Motor Corporation has announced that the company has won the 66th edition of the Okochi Memorial Production Prize for jointly developing an innovative aluminium casting technology that improves factory environment and product functionality.

Toyota developed the technology as part of its drive to achieve the ‘Plant Zero CO2 Emissions Challenge,’ which is one of the targets in the Toyota Environmental Challenge 2050 that was announced back in 2015. With demand for electrified models increasing, it is important for internal combustion engines also to evolve, like through the technologies that can help them achieve high thermal efficiency. For these two reasons, Toyota developed the aluminum casting technology that received this prize.

Manufacturing cylinder head
Toyota received the prize for a world-first aluminum casting technology for cylinder heads, which can have an impact on the performance of the engine. The cooling water channels of a cylinder head are generally made using molds fashioned from sand and adhesive, known as a core. The current technology to make cores uses an organic material called phenolic resin as the adhesive. The casting process that is used for making cylinder heads results in strong odors and smoke, creating a need for the use of highly expensive and large deodorisation equipment to minimize the impact of the foul-smelling gas by-products.

Structure of cylinder head cooling water channels
On the other hand, it is also also important to increase the cooling capacity of the cylinder head to improve engine performance, and this calls for the use of thinner and more complex cooling water channels. One possible alternative was to use inorganic material as the adhesive to eliminate the strong smoke and odor, but there was previously no method of manufacturing cores that would allow for complicated shapes and reuse of sand.

Using inorganic material
The aluminum casting technology that Toyota developed uses the inorganic material, water glass. This material does not cause any smoke or odors. The company also said that its innovative technology facilitates the creation of complex shapes and reuse of sand. Water glass is not subject to thermal degradation and hence using this material to adhesive the sand reduces odor concentrations during the casting process to 1/100th or less, thus reducing costs related to deodorization equipment.

The action of surfactants also creates a mousse-like consistency making it easier for sand to flow, thus making it possible to create thin and complex cooling water channels in the cylinder head. This plays a key role in the mass production of new model engines having a thermal efficiency of 41 percent. The temperature at which the sand is processed also came down, reducing CO2 emissions by more than 50 percent when compared to conventional methods.

The car manufacturer said that the cylinder heads made using this technology are currently being used across the globe. In the future, Toyota plans to extend the use of this technology both internally and to other companies as well, as well as tackle more new challenges to make society more sustainable.