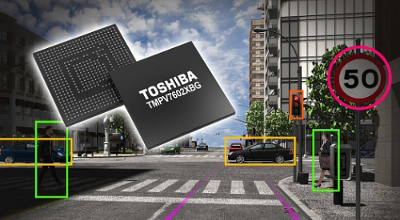 In its goal to take the automotive sector to new heights, Toshiba America Electronic Components has recently rolled out the newest addition to its TMPV760 family of image recognition processors. The TMPV7602XBG is highly suitable for monocular cameras utilized in ADAS, and is claimed to help designers implement ADAS applications using a cost-optimized camera system with a small form factor.

According to Deepak Mithani, senior director of the Mixed Signal Business Unit, System LSI Group at TAEC, with ADAS technology now widely used in new-model vehicles, they are continuing to establish their portfolio of image recognition processor that could accommodate an array of functions and capabilities. He added that the TMPV7602XBG was developed to offer provide high-speed, low-power recognition of images captured by the on-vehicle monocular camera—including road markings, traffic lights and signs, pedestrians and other vehicles—to help guarantee safe driving.

ADAS applications are processed concurrently within a time window of 50ms inside the image recognition processor and with comparatively low power consumption due to the purpose-built hardware accelerators and media processing units. The beauty of the TMPV7602XBG is that it can process up to five applications concurrently, with extremely low power consumption, and targets mid- to high-end ADAS designs. Optimization of the circuit to downsize the ADAS monocular camera module helps reduce the device’s package size and enables an anticipated five percent reduction in power consumption.

Mass production of the MPV7602XBG is slated to start in January 2018.