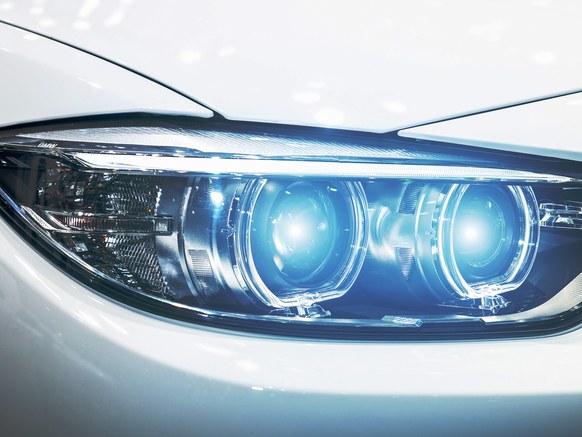 Texas Instruments used the CES show to debut a headlight system that uses the company’s digital light processing technology to generate beams which can be controlled precisely controlled with the help of over a million addressable pixels. This is technology that has been used in cinema and display projectors, and leverages tiny moveable “micromirrors” having the ability to flip as many as 10,000 times a second, to either reflect light through a projection lens, to create a white pixel, or onto a black absorption surface to create a black pixel. This has the effect of turning pixels on and off with the outcome being a smarter headlight, which can be programmed to function without blinding oncoming motorists and can even project text, graphics, or animations onto the road ahead. The chipset that facilitates this programming, is known as DLP5531-Q1, and Texas Instruments can supply this to automakers and their lighting suppliers.

Audi did unveil a similar laser-based technology last year, but the headlight system from Texas Instruments offers higher resolution and can work with any light source. Hence, it does not need more expensive laser tech.

Using this technology, motorists can keep their high beams on even when vehicles approach from the opposite direction. The system can track the oncoming car’s headlights via an onboard camera, and accordingly dim its own lights in that direction. This technology will also work in tandem with vehicle sensors to direct the driver’s attention to things like animals and roadside signs.
Such headlights would be immensely useful in the case of autonomous cars. Brian Ballard, TI’s exterior lighting manager said that the chipset was developed to support adaptive driving beam headlight systems, but can also be programed to project information on the road an dthus promote their acceptance among the public.
These headlights might not be road legal yet, but they do hold out the promise of improved visibility even when there are oncoming cars.