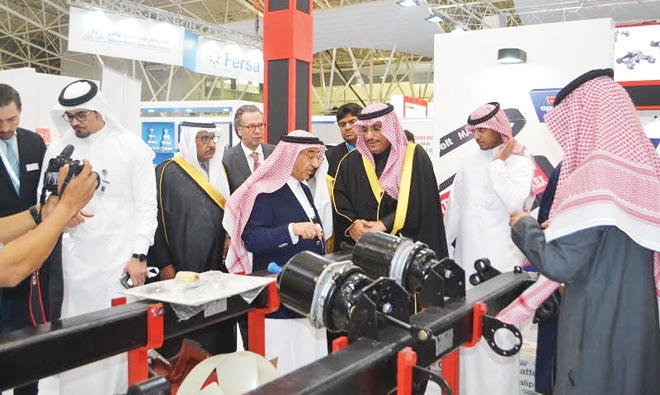 Debut Automechanika Riyadh Show Proves to be a Success

The first edition of Automechanika Riyadh proved to be an unqualified success as it drew 4,961 trade buyers. The show served as a platform for them to network with over 150 exhibitors from 21 countries at the first dedicated automotive aftermarket exhibition in the Saudi capital.

The event was held at the Riyadh International Convention and Exhibition Center, and featured country pavilions from Germany, US, Turkey, Korea and China. Organized by Messe Frankfurt Middle East in association with Saudi-based Al-Harithy Company for Exhibitions (ACE), Automechanika Riyadh takes the total number of Automechanika events to 17, making Automechanika the leading international automotive trade show brand in the world.

Participants included some of the leading manufacturers and suppliers of aftermarket spare parts, accessories, components, tires, batteries, systems and electronics in the world, who were all eager to gain access to the vast automotive industry in Saudi Arabia.

Commenting on the success of the show, Ahmed Pauwels, CEO of Messe Frankfurt Middle East said, “We’re delighted with the positive industry response to Automechanika Riyadh’s debut run, vindicating our decision to introduce the world-class Automechanika brand to the Kingdom’s Capital.” He said that that exhibitors and visitors seeking to intensify their presence in the Eastern and Central regions of the country reported a number of serious new business enquiries. He went on to state that Saudi Arabia has become an increasingly attractive market thanks to growing competition and changing brand preferences thus opening up fresh business opportunities for parts suppliers, distributors and retailers.

Pauwels said: “More than 8,500 automotive component dealerships and distributors in Saudi have positively influenced the parts aftermarket over the last few years. That’s reflected on the show floor at Automechanika Riyadh, which brings global standards, innovation and efficiency to this highly important regional market.”

Hadi Al-Harith, CEO, ACE Exhibitions, added that the recent royal decree that has provided a timeline for allowing women to drive is another factor that will spur growth in the automotive sector. 65 percent of the 14.8 million female population will now join their male counterparts in acquiring cars, thus bossting the demand for car care, upgrading and add-ons.

Al-Harith added, “This and other economic indicators in the Kingdom augur well for the success of Automechanika Riyadh, and we’re delighted to have concluded on a successful note this prestigious international trade show for Saudi’s automotive aftermarket.”

The show’s official launch partner was O2Proformance, and gold sponsor was Samir Odeh, which specializes in the distribution of original equipment manufacturer parts from Europe.

The show witnessed the participation of some of the biggest names in the aftermarket business, including GIC Brakes from the USA, German companies Alanko and Sortimo, Dongnam Corporation from Korea, Spanish company Blinker, and LEMA from Italy, a manufacturer of spare parts for European trucks and buses.
Ali Saeed Bawazeer, general manager of Dara Auto, added: “This is our second exhibition with Automechanika and it’s always good to be with them. We’re coming from Jeddah but we need to increase our presence in Riyadh too.”

Trade buyers formed another category that expressed their satisfaction. “I’m here to get the latest updates on new technology in car services and glad to see such a number of suppliers,” said Nasir Al Twairqi, who was looking for car accessories. I found what I’m looking for.”

Abdulmohsin Al-Bugami added: “It’s my first time visiting an Automechanika event and I’m impressed with the displayed products and information by the exhibitors. I have a car maintenance shop and met with a few companies from USA, Germany, China and Korea.”

Automechanika will be conducting Automechanika Riyadh and the existing Automechanika Jeddah shows in alternate years, with the two trade fairs combining to offer a dual gateway to Saudi’s entire aftermarket and auto services industry, from Jeddah, Makkah and Madinah to the West, and Dammam, Dhahran, and Alkhobar to the East.