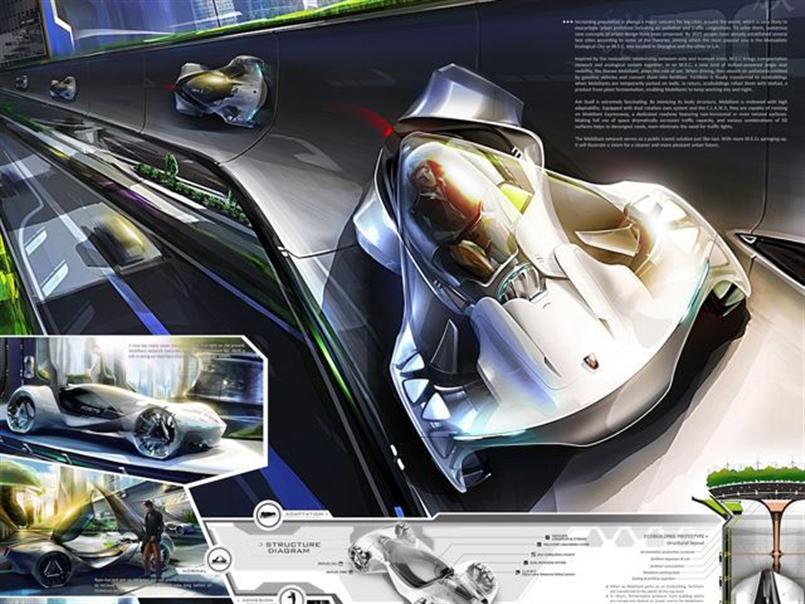 Systematica and ZGF Architects won the Industry Pick and People’s Pick awards respectively at the 2017 Designer & Developer Challenge held as part of the LA Auto Show. Systematic won the award for its connected and smart transport network concept while ZGF Architects came up with a transportation plan that revolved around Level 8 autonomy, shape-shifting vehicles and mag-lev lanes.

The Design & Developer Challenge began earlier this year and all participants were asked to come up with their take on a “smarter” mobility plan based on the idea that Los Angeles would include this plan as part of its bid to host a major international sporting event in the year 2060. Eleven teams came up with entries and vied with each other for three honors – Industry Pick, People’s Pick and Judges’ Pick awards.

The winners of the industry awards were based on the results of an online poll. Designers, automotive manufacturers, members of the media and other industry professionals voted for their favorite concept at automobilityla.com and chose Systematica as the 2017 Industry Pick award winner. Systematica, which is a transport planning and mobility engineering consultancy based in Milan came up with a plan that would make mobility easier for drivers, passengers and pedestrians during global events through a combination of full decentralization and an efficient hyper-connected network of vertical and horizontal transportation options. Systematica’s LA 2060 website visualizes Los Angeles as a smart global city that can easily accommodate residents and visitors with the help of a seamless, high-speed network of autonomous mass public transportation via an on-demand auto-drone fleet.

For selecting the people’s pick, LA Auto Show attendees and fans from around the world had a chance to vote for their favorite concept on laautoshow.com.  ZGF Architects earned the 2017 People’s Pick award for their multi-story transportation system comprising magnetic-levitation lanes, Level 8 autonomy vehicles and transmuting structures. The plan was conceptualized by ZGF’s Los Angeles team.  Their LA 2060 website provides a deeper look at new vehicles, fantastical sports and smarter venues, including the L.A. Coliseum.

“We congratulate the winning concepts from Systematica and ZGF Architects,” said Mark Pendergrast, Director Product Marketing for Azure IoT at Microsoft. “Their designs are the embodiment of innovative thinking and clearly demonstrate the positive impact that cutting technology can have on urban mobility.”

The Honda Advanced Design and Trigger team won the Judges’ Pick award for their intergalactic concept which included new mass and personal transit options, virtual reality and augmented reality experiences for sports fans at home or at venues, mobility solutions for those with disabilities and new land-, air- and sea-based sporting events.  The jury for this award comprised experts from the field of design, innovation, transportation and user experience drawn from the Art Center College of Design, Autodesk, City of Los Angeles Department of Transportation, Hot Wheels at Mattel, IDEO, Microsoft NEXT and Under Armour. The Honda team made an impressive presentation at AutoMobility LA on Nov. 29.

The Design & Developer Challenge is the world’s only annual competition that blends the automotive design community with creatives from multiple disciplines, including entertainment, technology, architecture and urban planning.

The 2017 Design & Developer Challenge was presented by Microsoft, supported by Autodesk and Lacks Enterprises with the Los Angeles Department of Transportation as its official partner.