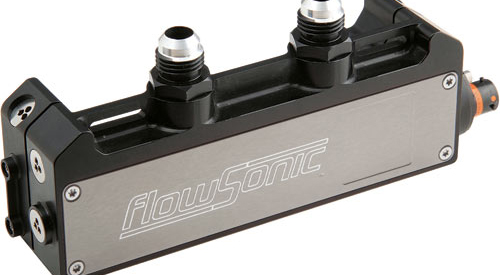 UK-based Sentronics is eyed to further make a name for itself with its recent launch of two FlowSonic fluid flow sensors for the automotive testing and development market at the Automotive Testing Expo.

The two products are by far the newest example of race-bred technology crossing over into the wider automotive industry. According to the company, the original FlowSonic range has been exclusively developed for the fuel flow control regulations launched at the FIA Formula 1 and LMP1 (Le Mans Prototype) competition in 2014. The FlowSonic LF has been developed for the ultra-low fuel flow conditions found in the newest generation of road car engines. Meanwhile, the FlowSonic HF measures the high fluid flows seen in heavy-duty industrial vehicle powerplants.

Both models provide laboratory-quality data in a package enabling portability between the road and the dynamometer. They deliver state-of-the-art ultrasonic, a true 2.2 kHz update rate, and fully digital internal processing. Included in the data outputs are mass, volumetric, cumulative flows, as well as diagnostics, speed-of-sound and running time.

What’s more, the FlowSonic can accommodate wide-ranging automotive testing flow rates, fuel types, vibration conditions, and temperatures. TTL pulse, CAN and analog output formats are also available. Without any moving parts and the benefit of intensive F1 and LMP1 bench and track testing, the performance of the sensor is matched. The great thing is that it is offered with a competitive price with traditional fuel flow measurement equipment.

Since its inception in 2013, Sentronics has established a track record of engineering high-level custom solutions based on its advanced technology. A year later, the company responded to the request of an F1 engine supplier to deal with measurement errors stemming from aliasing in the original FIA-homologated 11 kHz sensor by more than doubling the update rate. Then, the resulting sensor was fitted to the winning car in the last four Grands Prix of 2015.

In addition, Sentronics helped an LMP1 entrant to overcome grave sensor issues caused by high fuel temperatures with its FIA-homologated FlowSonic Elite HT model, which can run at 120 °C (continuous), 35 °C hotter than the original FIA specification. Meanwhile, for the LF sensor, the company specially modified its core technology to handle the ultra-low flow rates of late-model road car engines.