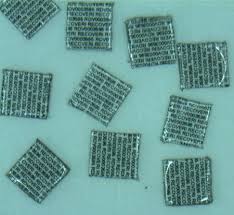 Leading vehicle security company Recoveri has announced that it would be venturing into the Indian vehicle security market with an investment of USD 10 million by 2019. Recoveri, which is based in South Africa developed an innovative technology which uses micro tags to identify vehicles and vehicle components.

The company is targeting mainly the four wheeler and two-wheeler market with its microdots. These microdots are 1 millimeter square grain size dots which carry unique number codes linked to the chassis of a vehicle, according to Recoveri CEO Philip Opperman.

As part of the vehicle identification process, Recoveri sprays 15,000 microdots on critical components inside vehicle. These microdots can be easily traced using an ultra-violet torch and a magnifier can be used to read the number.
Over the next one year, Recoveri is planning to make an overall investment of USD 10 million, most of which would be used to set up a microdot production factory in Manesar, Haryana. For marketing its product in India, Recoveri has teamed up with Delhi-based firm Falcon.

“We have had discussion with automotive component makers body ACMA for a pilot project that will commence in a fortnight. Component makers are keen to use microdots to check sale of duplicate products,” Opperman said.
Philip Opperman expects the company’s business in India to increase dramatically as the the government is working on draft regulation to prevent theft of vehicles. Once this is finalized, there will be more demand for Recoveri’s product.

Recoveri started operations in South Africa in 2000 and as an outcome of its success, it has now become mandatory for every vehicle with a VIN to be sprayed with microdots at the OE and aftermarket fitment levels in the country. The company has also been highly successful in the US and Latin American markets, especially Chile, where the police has promoted the use of the technology though it is not mandatory. Other countries in which Recoveri has made its presence felt include Australia, New Zealand, Malaysia and the UK.