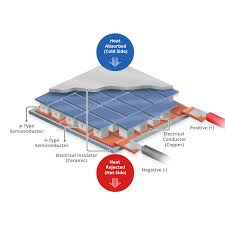 A startup based in Michigan called Promethient Inc. has developed a new seat warmer technology that it says is more efficient and durable than similar systems from competitors. The company has developed the Thermavance conductive heat transfer system. This system uses conduction of heat whereas most others transfer heat through convection for the purpose of warming seats.

In the case of convective seats, there is a requirement that the seats should be perforated so that the air can be moved through the seating surface. This makes the surface of the seats more prone to damage from wear-and-tear and from water.

On the case of the Thermavance heat transfer system, Promethient uses a solid-state thermoelectric module and graphene in order to transfer heat directly to the occupant of the seat instead of first either heating or cooling the surrounding air.

Promethient says the thermos electric module uses the flow of electrons to create the Peltier Effect within a semiconductor. The system is very user friendly and can be activated by a smartphone app. Depending on the polarity of the applied voltage, it creates a heating or cooling effect.

Graphene is a material that can conduct heat to a higher extent than copper, according to Promethient. It also offers the benefits of flexibility and light weight making it easy to adapt graphene for use on a variety of surfaces.

Promethient was set up in 2012, and has been dealing with the development of automotive applications for three years. The company’s new technology will first be used in an SUV which will be launched later in 2018.