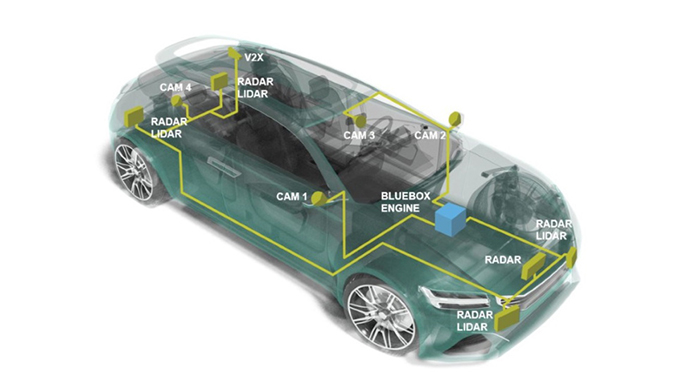 The demonstration of the system integrates the BlueBox central computing engine, together with lidar, radar, and vision sensing, as well as an onboard secure V2X system—all of which are powered by NXP silicon presently in volume production or sampling to customers now.

Already in the customers’ hands at four of the top five biggest automakers in the globe, the BlueBox engine works in NXP’s full autonomous platform to offer OEMs and their suppliers with the technology they need to meet the strict power, safety and processing performance requirements of the global automotive industry, utilizing readily available NXP technology.

NXP launches its new autonomous vehicles platform just months after becoming the globe’s leading provider of silicon to the global automotive market. It is also a world-leader in ADAS processors, having shipped over 30 million ADAS processors around the world to date. Eight of the globe’s top 10 biggest automakers utilize ADAS processors from NXP.

According to Kurt Sievers, NXP automotive business executive vice president and general manager, with this industry-first platform, the company is using its worldwide automotive silicon leadership to radically advance the state of self-driving vehicles. He said that their systems-level expertise, deep understanding of complicated ADAS engineering challenges, and broad portfolio of NXP products meet automotive-grade (ISO 26262-level) functional safety requirements, all position NXP as the decisive silicon provider capable of single-handedly accelerating the readiness and availability of the autonomous cars of tomorrow.

In autonomous vehicles systems, a number of streams of sensor data are routed to the BlueBox engine, where they are fused to create a complete 360° world model around the vehicle. This functionality significantly enhances car safety by both managing and preventing emergency situations.

Unlike closed systems focused only on vision or other single-sensor data streams, the NXP BlueBox engine for self-driving vehicles is an open-platform, Linux-based solution that is programmable in linear C language that automakers can easily customize to their needs and preferences for optimal product differentiation.