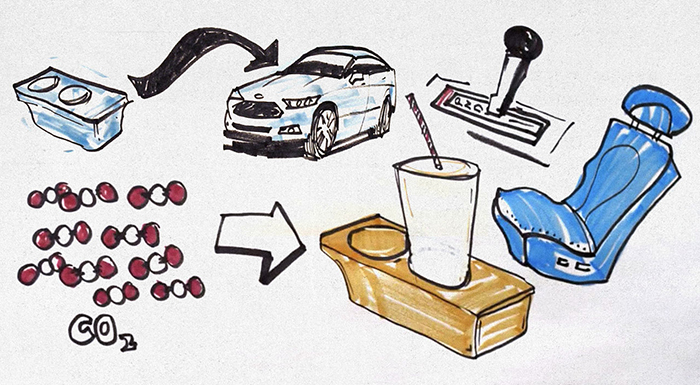 Ford Motor is further continuing its commitment to sustainability with the development and testing of new foam and plastic components utilizing carbon dioxide as feedstock. Researchers anticipate seeing the new biomaterials in the automaker’s production vehicles within five years.

Formulated with up to 50 percent CO2-based polyols, the foam shows a huge potential as it meets arduous automotive test standards. It could be utilized in seating and underhood applications, potentially cutting petroleum use by over 600 million pounds yearly—enough to fill around 35,000 homes in the US.

CO2-derived foam will further minimize the use of fossil fuels in Ford vehicles and step up the presence of sustainable foam in the automotive manufacturer’s global lineup.

According to Ford senior technical leader of sustainability Debbie Mielewski, the automaker is working aggressively to lower its environmental impact by cutting its use of petroleum-based foam and plastic. She claimed that this technology is thrilling as it contributes to solving an apparently insoluble problem, which is climate change. “We are thrilled to be leading the charge toward reducing carbon emissions and the effects of climate change.”

Climate change and carbon emissions are of increasing concern to world-leaders as an astounding 2.4 million pounds of CO2 are emitted into the atmosphere globally per second.

British Plastic Federation claims that plastic production accounts for around four percent of the globe’s oil use. Ford’s research team is hoping that the automaker’s early steps to utilize captured carbon in pioneering ways will help attain the long-term goals to reduce global warming recently set in the UN Paris Agreement.

For almost 20 years, researchers have worked successfully to develop sustainable materials for Ford products. In fact, in North America, soy foam is in every Ford vehicle.

Ford started working with a number of companies, suppliers and universities in 2013 to search for applications for captured CO2. Among them is Novomer, a New York-based firm that uses carbon dioxide captured from production facilities to produce cutting-edge materials.

Through conversion systems, Novomer produces a polymer that can be formulated into various materials including plastic and foam that are easily recyclable.

In a statement, Novomer chief business officer Peter Shepard said that Novomer is thrilled by the pioneering work Ford has completed with their Converge® CO2-based polyols. “It takes bold, innovative companies such as Ford to enable new technologies to become mainstream products.”

The American automaker is pleased to be the first to embark on a course toward reducing carbon emissions.

Mielewski concluded that at Ford, they are aggressively developing new, more sustainable ways to produce top-quality products, with an eye toward preserving and improving the world.