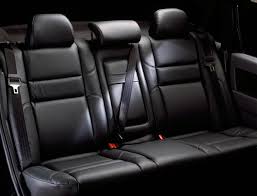 Many of us make the mistake of thinking that it is important to buckle up only if we are sitting in the front seats. That can be sometimes be a fatal mistake as death treats everyone equally. Research studies have found that fatal deaths in accidents would drop by 17 per cent if backseat passengers would buckle up. Another study found that almost 25 per cent of backseat passengers fail to buckle up. One incident this year that highlighted the dangers of not buckling up was an accident in which Nobel Prize winner John Nash and his wife died in a taxi crash. They were both riding in the rear seats and were not using seatbelts.

The Insurance Institute for Highway Safety in the United States conducted a crash test in which an unrestrained child-sized test dummy in the back of a van was launched. The dummy acted as a missile, hitting a passenger seated in the front before slamming into the windshield.

Many people believe that sitting in the rear seats is safer. Nevertheless, with technological advances like airbags and “crumple zones”, front seats are a lot safer than they used to be, while protection measures for back seat passengers has failed to keep up. Till the automotive industry makes advances in this regard, it is highly important for backseat passengers to buckle up and stay safe.