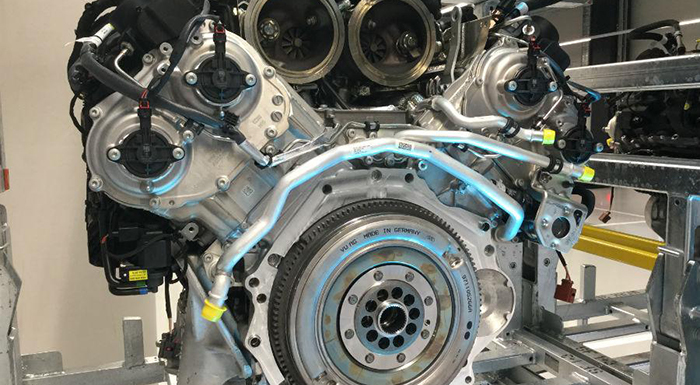 Porsche will reportedly supply its all-new V-8 gas engine to Bentley and Audi brands from a new facility close to its 911 sports car plant in Stuttgart, Germany. This suggests that the mechanical center of the Bentley Mulsanne and Audi’s refurbished A8 flagship due next year will be established in the city.

During the opening of the new plant, Porsche CEO Oliver Blume, commented that it will contribute towards synergies within the Volkwagen Group.

The premier sports car manufacturer invested around $88.6 million (80 million euros) in the plant, where 400 workers are anticipated to build approximately 200 units of the fourth-generation engine daily, which will feature displacement on demand for the first time in a Porsche.

The 4.0-liter V-8 aluminum engine cranks out up to 542 hp at 6,000 rpm, but it already delivers 335 hp at half that engine speed. There are twin turbochargers located between the two opposing banks of cylinders as opposed to the outside to provide the engine with more compact dimensions and enhance handling and performance.

The powerplant will be launched in the Panamera Turbo, which will make its grand debut in early November. The car can accelerate from 0 to 100 kph (62 mph) in just 3.8 seconds.

Despite the engine’s power, it is up to 30 percent more fuel efficient than its predecessors. This is made possible by the two-stage sliding camshaft that can deactivate four cylinders in partial load.

Porsche is also mulling electrification of its engines. The current V-8 engines are built with a modular structure that would more easily comprise hybrid powertrains.

In the next few years, the factory will also produce an electric drivetrain for the Mission E, Porsche’s first-ever purpose-built electric sports car which is due at the end of the decade.

The luxury automaker is investing nearly 700 million euros in its production facility in northern Stuttgart in the coming years, breaking up an investment logjam in which it had recently invested less than half that amount. It also mulls construction of a new paint shop and a separate assembly facility in Stuttgart.