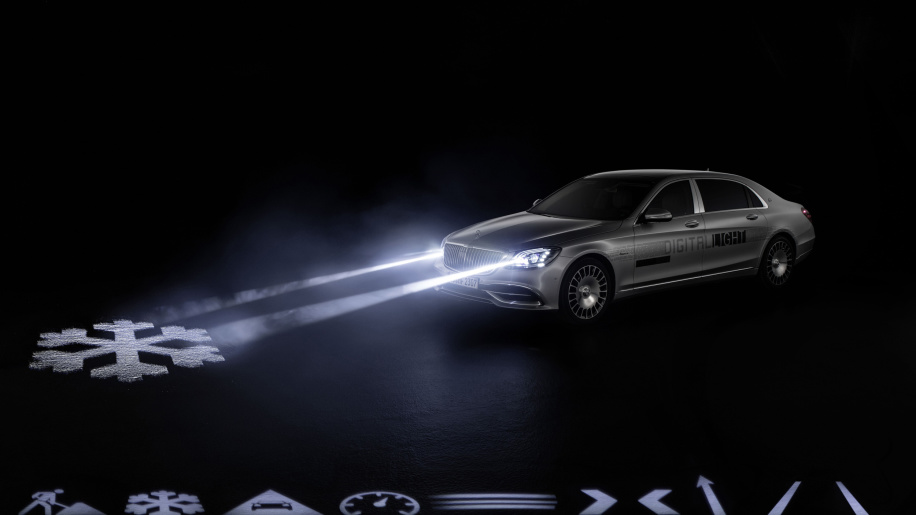 The automotive industry has been going though a period in which technological innovations are occurring at a very fast pace. One of these is the Digital Light system that Mercedes has recently launched for its Mercedes-Maybach customers. The Mercedes engineering team came up with a small LED having over a million micro-reflectors for each headlight. The light pattern can be controlled using hardware and software and it can depict at least nine different graphics on the road in light to warn motorists and pedestrians of safety issues ahead.

Digital Light represent an advanced version of the intelligent headlights Mercedes had demonstrated on the Mercedes Experimental Safety Vehicle in 2009, the same vehicle in which the company had previewed rear belt-bag inflating seatbelts. When it came to the intelligent headlights, the main beams comprised 100 LEDs, and a brain controlled each LED to create a specific and occasionally complex lighting pattern. The new Digital Light works with all the cameras, sensors, and navigation information employed by an S-Class, and has increased resolution 10,000-fold to roughly HD quality, with a commensurate rise in the complexity of available patterns and representations.

Mercedes cites numerous benefits, one being a “virtually dazzle-free main beam,” another being high beams that can selectively darken so as not to blind oncoming traffic or pedestrians. Some of the projected symbols include guide lines on the road representing the width of the sedan when navigating a narrow construction zone, an arrow pointing to a pedestrian either in or very near the road, a snowflake when the temperature drops below freezing, and a chevron placed on the center line or shoulder to warn a driver when he’s leaving his lane or when there’s someone in his blind spot.

Digital Light will first go into service with selective fleet customers for the Mercedes-Maybach S-Class this year. Considering the state of current U.S. auto regulations, we wouldn’t expect to see it here for a number of years.