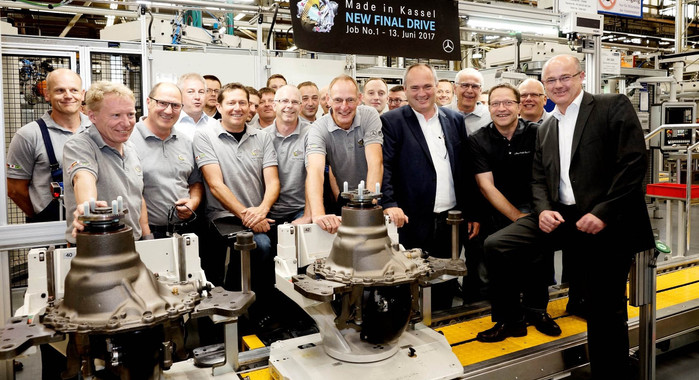 Mercedes-Benz recently commenced production of its new fuel-efficient truck axle at the company’s factory in Kassel, Germany. Mercedes-Benz claims that the new rear axle can reduce fuel consumption of the Mercedes-Benz Actros truck by up to 0.5 percent.

The New Final Drive (NFD) does this due to its lighter weight and actively controlled oil regulation meaning that the lubricating oil is supplied only as needed based on various parameters like torque, speed, temperature. This reduces the swirl of liquid in the final drive and the amount of frictiondue to the gears turning in the oil bath. Mercedes-Benz claims that no other company offers this technology and type of construction.

The New Final Drive axle rounds off the second generation of the Integrated Powertrain from Daimler Trucks. When compared to its predecessor, the Mercedes-Benz Actros saves fuel by up to 6.5 percent. As part of the Daimler Trucks platform strategy, the new truck axle will be made at the company’s factory in Detroit as well as at the Kassel plant.

Commenting on the new truck axle, Dr Frank Reintjes, Head of Global Powertrain and Manufacturing Engineering Trucks said, that the second generation of the Integrated Powertrain from Daimler Trucks – comprising the engine, transmission and axle – has already resulted in fuel savings of up to 6 percent for the Mercedes Benz Actros thus ensuring the lowest possible Total Cost of Ownership. He said this is the world’s first intelligent truck axles and it can cut fuel consumption by a further 0.5 percent. This achievement highlights the company’s technology leadership and is of immense value to its customers.

Mercedes-Benz began series production of the fuel-efficient truck axle at the Kassel plant on June 13, 2017 and inaugurated the ultra-modern assembly line. The plant is notable for its cutting-edge production technologies and a high level of automation. One example is the use of new laser technology to directly weld together components inside the axle instead of bolting them together. It is this technology that reduces unnecessary oil swirl in the final drive and has a positive effect on fuel consumption. The German company invested a total sum of around 30 million euros in the new NFD assembly line in Kassel.