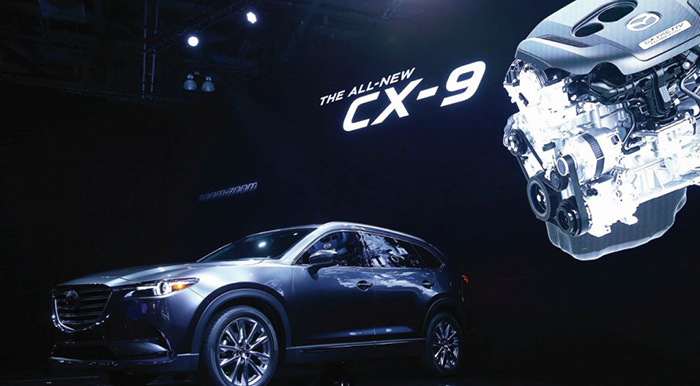 Mazda Rolls Out Turbo Petrol Engine in the New CX-9

This year’s Los Angeles Auto Show, which opened on November 20 and will run until November 29, offers the world’s best surprises for car fans and enthusiasts. At the event, Mazda wowed visitors with its newly unveiled engine and model.

So far, SKYACTIV-G 2.5T is currently the most powerful engine in Mazda’s line-up, producing up to 184kW (250 PS) and 420Nm on the North American version. Fully based on the naturally aspirated SKYACTIV-G 2.5 offered in the Mazda CX-5 and Mazda6, the all-new turbocharged direct-injection powerplant delivers a more solid acceleration, particularly in the low and mid-rpm range, along with outstanding responsiveness. The new engine is rightsized like all SKYACTIV engines, overcoming usual turbocharging issues such as turbo lag as well as fuel consumption.

The Japanese automaker also showed off the Dynamic Pressure Turbo, the globe’s first turbocharger to maximize turbine performance by altering the level of exhaust pulsation in accordance with engine speed. Meanwhile, the cooled exhaust gas recirculation (EGR) system enables the engine to retain the ideal air-to-fuel ratio, delivering the right quantity of oxygen required to burn the fuel.

The new SKYACTIV engine will initially be featured in the new Mazda CX-9.