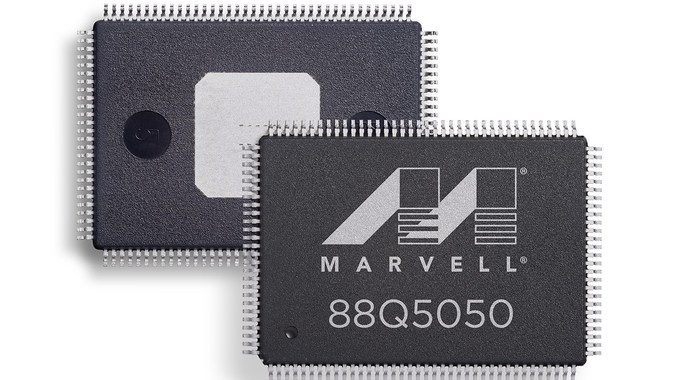 Marvell teams up with Nvidia for Secure Autonomous Platform

Leading technology company, Marvell has announced that its 88Q5050 secure automotive Ethernet switch has been integrated into Nvidia’s ‘Drive Pegasus’ platform which will be used for autonomous vehicles. Marvell says that this would be the first commercially available solution with embedded security built into the core.

The 88Q5050 secure automotive Ethernet switch has the capability to handle multi-gigabit applications so that car manufacturers can provide an in-car network which can support cameras, safety, sensor fusion, and diagnostics. This embedded security technology has the capacity to provide protection to vehicles against cyberattacks, which can affect the safety aspect.

The Pegasus computing platform has been made to handle Level 5 driverless vehicles and can carry out as many as 320 trillion operations per second. It combines deep learning, sensor fusion, and surround vision to provide an accurate picture of what is happening around the vehicle in real-time. The Marvell 88Q5050 layer 2 managed secure IP switch makes it possible to transmit this data in a safe and quick manner in highly advanced connected vehicles.

The automotive Ethernet provides greater protection against increasingly common cybercrime and when compared to connectivity protocols that were used earlier in cars, like controller area network (CAN), it is more secure. The Marvell 88Q5050 solution prides a high level of security with the use of a deep packet inspection (DPI) engine and a trusted boot functionality. The switch also supports both blacklisting and whitelisting addresses on all its Ethernet ports to further enhance its security especially against denial of service attacks.
Marvell said its switch solution is AEC-Q100 qualified and meets the highly rigorous standards that apply to the automotive industry. It can tolerate harsh automotive environments and supports multiple integrated 100BASE-T1 PHYs as well as 1000BASE-T1 interfaces. It can connect with Marvell’s previously announced 88Q2112 1000BASE-T1 PHY.

Thomas Lagatta, executive vice president, sales and marketing, Marvell said that the 88Q5050 is Marvell’s latest addition to the automotive portfolio of wired and wireless network solutions. It has been designed to prevent malicious attacks or compromises to data which might be streamed in and out of the vehicle.