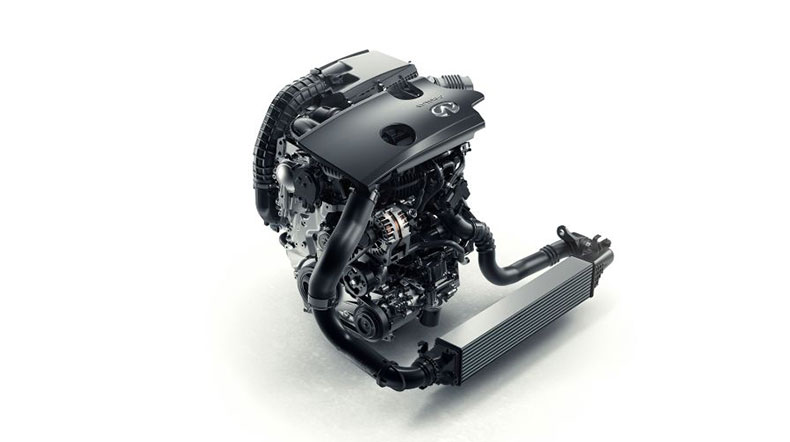 Efficiency and performance are the key watchwords in the auto industry today. Infiniti is all set to introduce variable compression engines in production cars in order to increase their efficiency.

In conventional engines, the ratio of the volume of the combustion chamber when the piston is at the bottom of its stroke as compared to its volume when the piston is at the top of its stroke or the compression ratio is fixed. Infiniti has developed a variable-compression engine that seeks to increase efficiency by making it possible to alter the compression ratio. This new engine can shrink its displacement under low loads, thus using up less fuel and increasing fuel efficiency. When it is necessary to have more power, it is possible to change the configuration of the engine to increase its displacement.

The first VC-T engine will be a turbocharged inline-4 that Infiniti claims will offer the performance of a naturally-aspirated V-6. The compression ratio of the new engine can vary from 8:1 when performance is at its highest to 14:1 for maximum fuel efficiency. At the lower 8:1 compression ratio, the engine benefits from higher boost pressure from the turbocharger while minimizing the risk of detonation or engine knock.

Depending on the driving conditions and the terrain that is being tackled, the settings are adjusted automatically, without the need for any action from the driver. The compression ratio is changed by means of a rotating component that is called the Harmonic Drive. The Harmonic Drive uses mechanical means to adjust the settings between the piston and the crankshaft, thus changing the maximum height the piston can reach within the cylinder and causing the compression ratio to change.

Infiniti plans to begin production of the VC-T engine in 2018, and will be divulging more details about the engine at the 2016 Paris Auto Show.

Many auto manufacturers like Saab, General Motors and Mercedes-Benz have dabbled in variable-compression engines, but Infiniti is the one that is closest to incorporating one in a production model.
Mercedes-Benz had unveiled its F700 concept at the 2007 Frankfurt Motor Show which was powered by a variable-compression engine named “DiesOtto.” According to the company, the small 1.8-liter twin-turbocharged 4-cylinder engine was capable of exhibiting the same performance as a 3.5-liter, V-6 engine.