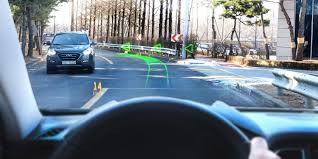 Hyundai teamed up with Wayray to showcase a new augmented-reality navigation system at the recent CES 2019 show. Wayray is a startup that specializes in augmented-reality technology and Porsche is another company that has also acquired a stake in Wayray. Hyundai installed Wayray’s technology in a Genesis G80 sedan at CES and the prototype system used holographic images to help drivers navigate.

Yunseong Hwang, director of Hyundai Motor Group’s Open Innovation Business Group said that the demo car was the first step of the proof of concept, but marked an important advance in technology-driven innovation. He went on to say that in the future, windshields would prove to have a more than aesthetic function. According to him, augmented reality technology offered scope for many more in-car services and features.

While conventional head-up displays show images in a small projected box which is located close to the base of the windshield, the AR system projects images all the way across the windshield. Hence, the images can be synchronized with the real-world objects they stand for.

WayRay’s system performs all the key functions that current head-up displays perform and could possibly make them obsolete. For example, they could show navigation guidance and speed. According to Hyundai, the augmented reality system could work with driver assist features like lane departure warnings and forward collision warning.

The system could use V2X (vehicle to everything) communications to indicate to the motorist when a traffic light is going to change. Audi is another company which is already working on a traffic-light information system, though it uses a dashboard display.

Hyundai failed to disclose if it would ever use the system in a production model, but it did say that it is working with Wayray on refining the technology.