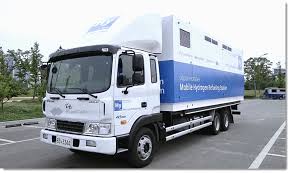 In contrast to current hydrogen fueling stations in the United States and Japan which use high-pressure gas, this new mobile station supplies vehicles with liquid hydrogen. Hylium says such stations are more efficient and safer. Hylium developed the station with support from K-ICT Born2Global Center, which helps promisibng tech startups to enter global markets.

The mobile refueling station uses an 900bar liquid hydrogen pump system, which ensures there is no need for a compressor or cooling system with the outcome being lower costs for equipment and for driving.
Hylium Industries CEO Kim Seo Young said, “In addition to being a ‘green energy’ technology, hydrogen technology is a cutting-edge field in which intensive research and development is being carried out all around the world. Hylium Industries’ liquid hydrogen-based mobile hydrogen fueling station will significantly contribute to the effort to expand the liquid hydrogen supply infrastructure for hydrogen-powered cars worldwide.”

Hylium Industries was established in 2014 and is the first company in Korea which has come up with a technology for the storage of ultra-low temperature liquid hydrogen.