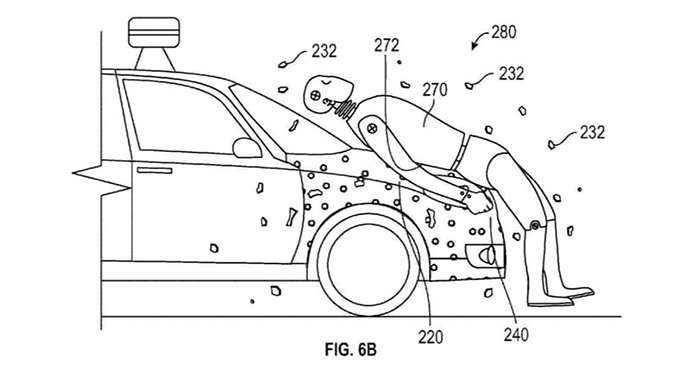 Google’s self-driving cars have been out and about for several years, and their record for safety is looking good so far. However, accidents are something that even the best robot drivers cannot avoid. Thus, the company has patented a creative safety feature: an adhesive front end that glues pedestrians to the car during an accident to prevent them from bouncing off and hurting themselves.

The system, known as Gloogle, takes the opposite approach to pedestrian airbags by utilizing an adhesive layer installed into the hood and front side panels of the autonomous cars. This sticky layer would be sheltered by a thin coating designed to break open on impact. In the event the car crashes with a pedestrian, the force cracks the coating, exposes the adhesive and holds the person securely onto the front of the car, preventing the secondary impact they could suffer by being thrown into another object or onto the road.

Many agree that this is an interesting idea, but some things are still vague. The material composition of the adhesive itself still seems to be up in the air, with Google canvassing the use of quick-acting, contact, pressure-sensitive and viscous adhesives in the system, as well as the critical step of ensuring it is a releasable adhesive so that the cooling object may be decoupled from the adhesive layer after a period of time.

The automotive world is also excited to see whether Gloogle would actually prove to be safer than its absence in all circumstances. In the event a car hits a pedestrian and then falls off a bridge, for instance, being glued to the hood is absolutely a huge drawback.

Of course, just like a number of patents, the technology might never materialize, and the patent application recognizes that even if it gets fitted to Google’s self-driving cars, it may only be a stop-gap.