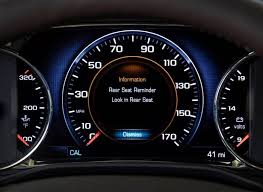 The issue of child deaths due to heatstroke has led to growing concern. In an effort to minimize such instances, General Motors had debuted a rear Rear Seat Reminder technology in its GMC Acadia model. Now, in a welcome move, the company has announced that it will be expanding this technology to as many as 20 models.

The Rear Seat Reminder technology reminds the driver to check the back seat if the rear door is opened and closed with the engine running or up to 10 minutes before the vehicle is turned on. An auditory alarm produces five chimes and a reminder appears on the display on the instrument panel “Rear Seat Reminder/Look in Rear Seat” once the engine is turned off.

The technology will be included as a standard feature on 21 models including the  2017 Chevrolet Silverado and 2018 Chevrolet Equinox. According to said Jeff Boyer, vice president of GM Global Safety, the feature is just an initial step to help remind drivers to check their rear seats before exiting from the vehicle. It is a welcome innovation in a world where deaths of children due to heatstroke when they are left in vehicles unattended for long periods is on the rise every year

Kate Carr, CEO of nonprofit organization Safe Kids Worldwide, in a statement said that the new technology from GM will serve as an important reminder to busy parents and caregivers and will help in minimizing such tragic instances of heatstroke related deaths in children

A 2012 study conducted by the National Highway Traffic Safety Administration found that 527 children died as a result of vehicle-related heatstroke between 1998 and 2012. In as many as 51 percent of these cases, the children were unintentionally left behind by the caregiver, while in 30 percent of the cases, they were playing in the vehicle while unattended.