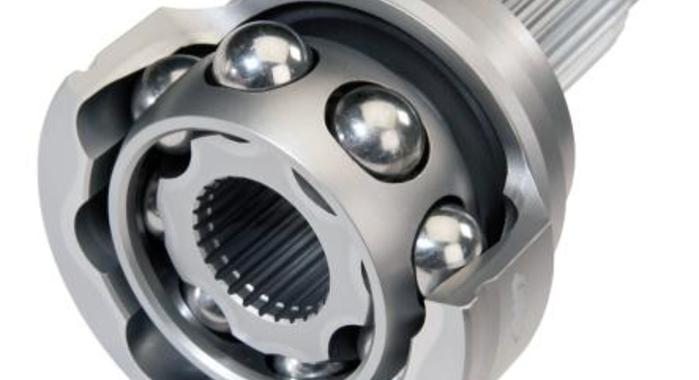 GKN Driveline’s new lightweight VL3 constant velocity joint (CV joint) system will be used in its second application on the all-new BMW 5 Series sedan. According to GKN Driveline, the VL3 joint significantly enhances the efficiency of the driveline and reduces CO2 emissions.

GKN had the patents on the VL series of CV joints for the past 50 years and had last revamped its design  in 2001, when the VLi joint was used in the BMW 7 Series. The VL3 constant velocity joint was developed in a short period of just 18 months for the new model of BMW’s luxury saloon and sets a new benchmark when it comes to lightweight, high-performance sideshaft systems.

The VL3 design is a brand new S-shape track in the housing, and transforms the manner in which the  ball bearings move. The balls now have a wider range of movement, and this helps to distribute the torque evenly between the bearings and thus balance the forces in the joint. This makes the cage stronger and improves refinement in the joint movement.

Automakers benefit from greater flexibility and efficiency as eight-ball bearings are used instead of six. When more bearings are used, the outcome is a lower load per ball, and each ball can be smaller in diameter. The diameter of the packaging can be reduced without in any way compromising the torque capacity of the joint. In the event that the VL3’s eight balls have the same size as the six in the VLi system, it is now possible to transmit higher loads through the joint. Hence, the design is more flexible, and automotive manufacturers can now opt to reduce packaging size, increase torque capacity, or do both.

The third main innovation in the new VL3 joint is the diaphragm-shaped boot, which results in an improved sealing system. This diaphragm design replaces the typical cap-and-boot solution that is seen in VL series joints, and a shallow, one-piece contoured cover is used instead. Reducing the size of the cover minimizes the volume of grease that is needed to pack the joint. This reduces the weight and cost of the joint, as well as the space needed to package it – giving more freedom to the design of the surrounding suspension components.