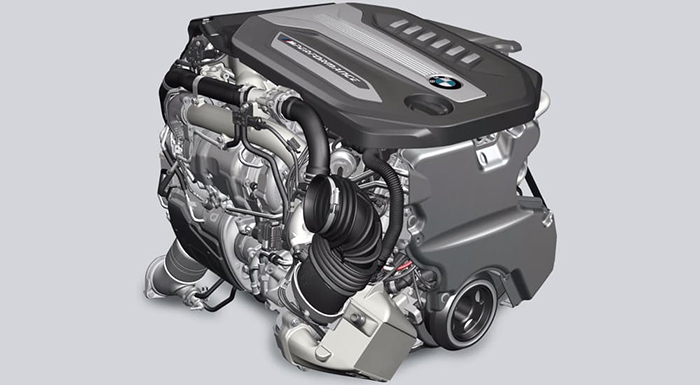 As automotive manufacturers strive to cut emissions, more vehicles are rolled out with one, two, and occasionally three turbos. Until now, no one aside from Bugatti has been wild enough to strap four turbochargers to the one engine, but BMW’s new 750d promises to change that with its quad-turbocharged 3.0-L inline six.

By simply adding another turbocharger to its M Performance, the German automaker has managed to squeeze five percent more power from the same 3.0L displacement. It is quite impressive that there is 294 kW (400 hp) available at 4,400 rpm, but it is claimed nothing compared to the crazy torque being produced.

Featuring a peak torque figure of 760 Nm (560 lb.ft), the all-new 750d produces more twisting force than out-and-out performance cars such as the twin-turbo Audi RS6 and V8 BMW M5. Additionally, BMW claims that there is 450 Nm (332 lb.ft) on tap from idle, which must make for smooth performance irrespective of what gear you are in.

In spite of this outstanding performance, BMW’s engineers have managed to shave 11 percent from the old car’s combined fuel economy figure. With the right wheel and tire combination specced, the 7 Series will return 5.7 l/100 km (49.6 UK mpg), which corresponds to CO2 emissions of only 149 g/km.

Now, how does BMW manage to extract such remarkable figures from such a huge car? The quad-turbo setup plays a huge part here: two compact variable-geometry turbochargers built into the one housing handle high-pressure demands by spooling up quickly and offering an instant boost.

In the automaker’s outgoing tri-turbo motor, these little turbines worked in combination with one big low-pressure turbo, but it has been replaced by two smaller units for quicker response.

The bypassing and boosting are managed by BMW’s newest generation of Digital Diesel Electronics controller, which is tasked with managing the activity of each turbocharger, the exhaust gas butterfly valve, the intercooler, the wastegate, the position of the flaps that enable each turbine to be bypassed or called into action, and the position of the variable-geometry turbine vanes. The controller has to manage these things every time the driver puts their foot down, adjusting the way the system operates based on how hard the throttle has been pressed.

Aside from turbochargers, pressure also plays a role in making the engine more efficient. Maximum combustion pressure has been raised from 200 to 210 bar (3046 psi), and the crankcase and cylinder head have been produced utilizing a high-pressure compression process. Meanwhile, the piezo fuel injectors operate at over 2,500 bar (36,259 psi).

Engineers behind the 750d’s engine have also launched a new five-layer head gasket, low-friction coatings on the cylinder bores, and pistons made from an alloy of silicon and aluminum.

To be rolled out next month, the 750d xDrive will be offered in regular or long wheelbase guise. Though there is already a V12 petrol in the range that delivers intense torque figures, the discerning limousine driver will be very tempted by the combination of efficiency and power offered by the new diesel.