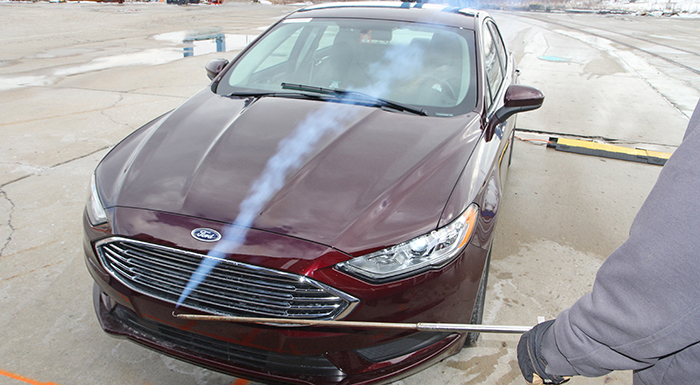 The automotive world is now on the lookout for the new quieter vehicles Ford will be launching, thanks to an innovative testing method known as aeroacoustic mobile wind tunnel testing.

With this method, Ford claims that unrequired or unpleasant wind noise could be eliminated in the concept or design stage itself. This system also enables problems spotted earlier to be solved sooner. As a result, the customer gets to drive a car which can block unnecessary sounds and enhance driving experience.

According to Ford wind noise core supervisor Bill Gulker, this project was born from a desire to be the best in terms of controlling and limiting the cabin noise customers are so sensitive to. “And our new mobile wind tunnel saves our engineers time and increases productivity. It’s a fine example of the innovation mindset we’re trying to incorporate into everything we do.”

The American automaker already has $50m full-sized testing facility at Allen Park, Michigan which is fitted with sensitive measuring and analysis equipment. It claims that due to the cost of these systems, running them might be uneconomical.

Hence, Ford had to come up with a new mobile wind tunnel that costs a fraction of a full-sized wind tunnel. As the testing needs a steady-stream of highway-speed wind, a number of high-tech sensors or equipment are not needed. This also considerably minimized the cost of the wind tunnel.

Ford claims that with a more streamlined and smaller wind tunnel, it can be easier to pull out vehicles from the production line and test them randomly without delays. In fact, the mini-wind tunnel itself has been built utilizing two 53 foot shipping containers, each with aeroacoustic vanes and internal ducting to offer smooth and controlled airflow at the nozzle end of the machine.

Ford claims that instead of bringing all the vehicles that must be tested, this mini-wind tunnel can be taken anywhere and vehicles can be subjected to tests.