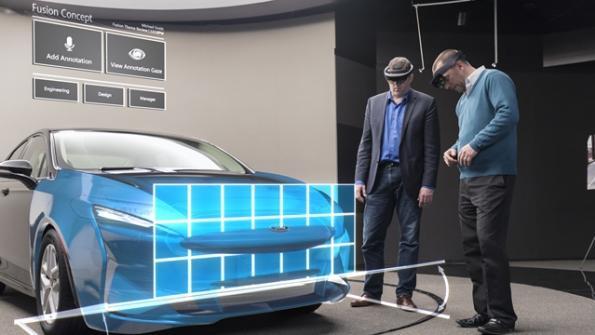 Ford First Car Manufacturer to Use HoloLens in Design Process

Ford is all set to become the first company to expedite the production of cars using Microsoft’s HoloLens headset on a commercial basis. While companies like Volvo and Volkswagen are still testing the use of HoloLens for different applications, Ford has moved a step ahead and after an initial pilot phase lasting for one year, the company will expand its use of Microsoft headsets to allow automotive designers to quickly model changes to the designs of trucks, SUVs and cars.

Designers will be able to use the headset to visualize the changes on top of an existing physical vehicle, rather than using a conventional clay model.The designers can use HoloLens to see features as though they are physically part of the vehicle in the studio. They just need to flick their finger and project different options on a car’s surface to look at different options for a grille design or for a mirror housing.

HoloLens will also allow designers and planners to work with those in other disciplines by recording audible notes on vehicle attributes and attaching them to a specific location on the vehicle for follow up.
Ford will continue to use clay models, but will use the HoloLens to augment additional 3D models without the necessity of building clay prototypes for minor tweaks to the design. And Ford will combine the traditional method of clay modelling and the new, the holograms.

Each HoloLens headset comprises a Windows 10-based computer and all of the sensors, connectivity, visualization and sound amplification equipment needed for each wearer.
Ford will roll out HoloLens to its 10 global design labs in North America, Europe, South America, China, India and Australia now that the testing phase is over.