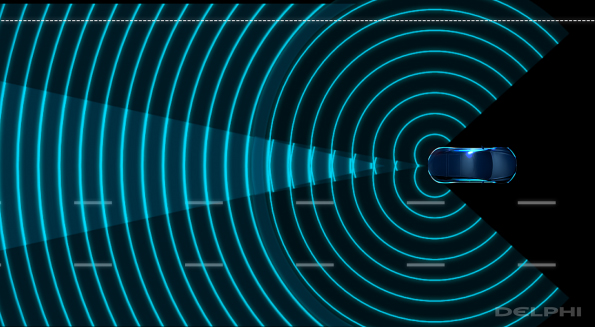 In its target to take 21st century motoring into a new dimension, Delphi has recently implemented new radar-based assistance functions based on environmental data from 77GHz radar sensors. Included in these functions are side impact protection, lateral traffic assistance, and a function that takes measures to alleviate the impact of rear-end collision.

The four radar sensors, which are located at the corners of the car, ensure 360-degree monitoring around the vehicle and cover distances of up to 80 meters. For instance, the two rear sensors track the blind spot of the rear-view mirrors. In case there is an approaching vehicle, the lane change assistant system alerts the driver not to change lanes.

Moreover, the functions designed to avert rear-end collisions employ homegrowrn Delphi algorithms. In the event the two rear-end radar sensors spot an impending rear-end collision, the system increases the attention of the following traffic—for instance by flashing the lights at a high rate. In case the collision is impossible to prevent, the system can take preparatory safety measures such as tightening the belts and closing the sun roof and windows.

Combining camera data and radar is also a further alternative. This approach is utilized in Delphi’s side impact protection function and tracks the traffic on multi-lane roads by means of radar sensors and cameras. In the event a vehicle driving in an adjacent lane begins moving towards its own lane and an impact becomes probable, the system changes the lane to prevent the collision, if possible without hazard.

Though not prototypes, Delphi’s systems are already available in real-world vehicles. The company said that its new driver assistance systems are built into a vehicle that is already in series production.