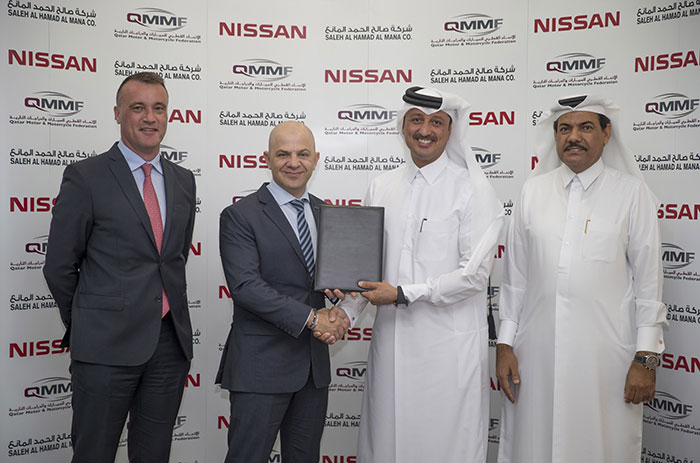 Nissan Middle East and the company’s exclusive dealer in Qatar, Saleh Al Hamad Al Mana Co., have undertaken to sponsor Qatari rally driver, Adel Hussain Abdulla, as he prepares to participate in the World Rally Championship (WRC) 2016. The sponsorship deal will cover the provision of a new Nissan Patrol XE for the WRC, complete support during the race and all the associated expenses including parts and technical support.

Commenting on the sponsorship, Samir Cherfan, Nissan Middle East’s Managing Director said: “Motorsport is in the DNA of Nissan, which makes it vitally important for us to support champion racers around the world.” He added that Adel is an exceptionally talented driver who has brought credit to the entire region with his tremendous success in Middle East championships with the Patrol. This is the reason why Nissan has extended its support to his attempt to contest in the World Rally Championship by continuing to drive in the ‘Hero of all Terrains in Life’.”

Qatar-based Abdulla is a veteran of the rally circuit and has participated in over 140 regional and international events as co-driver and driver for the past 26 years. He is known not just for participating in races, but winning them too with victories in Qatar’s International Baja, the Kuwait International Rally, and Saudi Arabia’s Ha’il International Rally which are considered to be some of the toughest races in the world and has also gained many podium finishes cars and on quad bikes.

In 2016, Abdulla will participate for the first time in the FIA World Rally Championship with French co-driver Jean-Micheal Polato, who has longstanding experience in WRC events. The duo will also be sponsored by the Qatar Motor and Motorcycle Federation (QMMF).

Abdulla is very familiar with the Nissan Patrol and used the vehicle to place first in the T2 category of this year’s Abu Dhabi Desert Challenge, as well as for racing in the Sealine Cross-Country Rally in Qatar. Currently, he is in second position in the T2 Championship rankings and is eyeing the top spot, which would help Nissan to claim its second consecutive win, after Denis Berezovsky’s victory in 2015, which was also supported by Nissan Middle East.

“Nissan’s heritage in motorsport is long, rich and perse,” concluded Cherfan. “And rallying, while extremely tough, is what the Patrol is designed and built to cope with. It is this region’s favourite all-terrain vehicle and enjoys a fiercely loyal fan base thanks, in part, to the impressive performances the model puts in each year on the world rally stages.”

He went on to wish Adel every success and expressed his desire to see him and the new Patrol scale new heights in some of the toughest motorsport competitions in the world.

For the 2016 season, Abdulla’s Nissan Patrol will be prepared, maintained and supervised by the leading Turkish motorsport company, TOK Sports