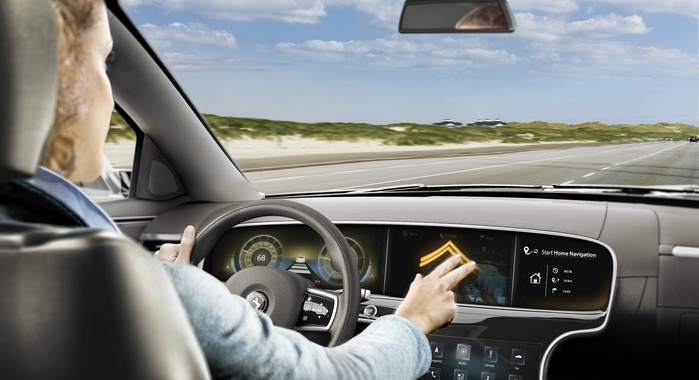 Renowned automotive supplier, Continental has come up with technology that makes non-verbal communication between drivers and their vehicles easier. Using the new interface, drivers can use a range of user-friendly touch gestures for the cockpit to keep their focus on the road.

With a combination of gestures and touchscreens, drivers can use specific, defined symbols like hearts and a house roof symbol on the input display to immediately trigger a wide array of functions and features.

Dr. Heinz Abel, head of Cross Product Solutions at Continental’s Instrumentation & Driver HMI business unit said that the use of gestures and system control through haptic methods will make it possible for drivers to access controls and functions much faster than conventional control concepts which need buttons, switches and knobs. There is still plenty of scope for drivers to get distracted. Hence, Continental combined both elements to reduce the potential for driver distraction as compared with the use of a touchscreen.

Drivers just need to touch the display with two fingers to enable touch gesture interaction and there s no need for additional actions like activating handwriting mode. Once touch gesture interaction is enabled, motorists can with two fingers, use a heart symbol for a favorite contact or a house roof symbol to ask the navigation system to set the route for home. You only need to draw a circle to turn on the AC in your home even before you reach.

Dr. Abel said that in order to ensure more widespread use of such technology, it is important that the gestures to be used are intuitive and do not have to be learned specially. At the same time, they should not detract from the focus the motorist has on the road and should be easy to remember.

The two-finger touch gestures can be drawn anywhere on the touch-sensitive surface of the input display, and drivers hardly need to take their eyes off the road. This makes their use intuitive and user-friendly. Users also have the option of creating favorites that can be accessed directly at the first menu level.

“Our touch gestures cover the most frequently used functions in vehicle–driver communication, while, quite incidentally, the new approach makes the system much more fun to use as well,” said Dr. Abel, summarizing the benefits of this new concept.