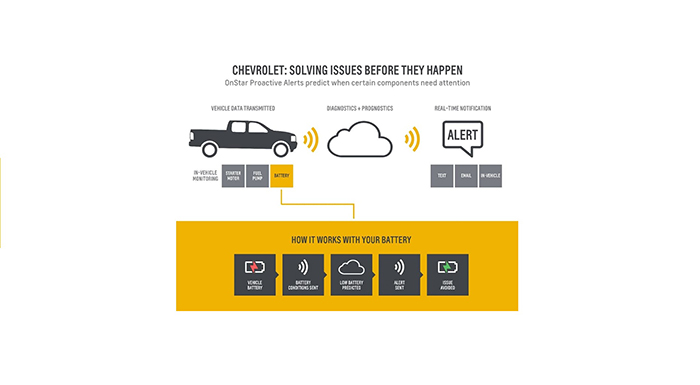 Aiming to inhibit car owners from getting an unwanted surprise when they turn the key, Chevrolet has developed the OnStar Proactive Alert System. This revolutionary technology detects if something is not quite right under the hood and will prompt motorists to get their vehicle serviced before the onset of costlier or ill-timed breakdowns.

Chevrolet reveals that Proactive Alert gets inspiration from the Boeing 787, which can send mid-flight messages to the ground crew if its spots a part that requires inspection. Each time the car is started, the system gathers data regarding the health of main components, including the fuel pump, 12-volt battery, and starter motor, and compares it against data collected from other cars in the Chevrolet OnStar fleet to forecast maintenance issues before the fact.

In case the data is not quite in sync with the rest of the fleet, the system will alert the driver with a text, email or a message through the car’s infotainment system. These warnings are also specific so the driver is not likely to get a warning telling him to replace the battery when the car just needs a short drive to replenish it.

According to Steve Holland, chief technologist for Vehicle Health Management at GM, accuracy is the key to their prediction algorithms. He says that they will be able to inform dealer service departments so they can spend less time testing for a condition they have already diagnosed. “They can replace the necessary part quicker and minimize the amount of time a customer’s vehicle is at the dealership.”

The Proactive Alert system is offered as an opt-in service for OnStar subscribers driving 2016 Chevy Silverado, Suburban, Tahoe, Equinox, and Corvette, although the company hopes to expand the number of supported models and components in the future.