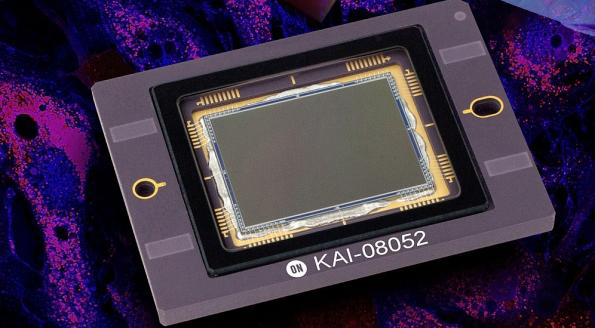 The KAI-08052 image sensor is reportedly the first device in ON Semiconductor’s CCD portfolio to use the company’s new technology, which delivers up to twice the sensitivity in near-infrared wavelengths as the company’s standard Interline Transfer CCD pixel design. This improved sensitivity can be crucial in applications such as medical and scientific imaging, where samples fluoresce or emit in NIR wavelengths; or in machine vision and intelligent transportation systems (ITS), where NIR illumination is often utilized to better inspect an object or to isolate a vehicle’s license plate.

The CCD pixel design which is employed in the KAI-08052 extends the electron capture region deeper in the silicon to better capture electrons produced by long wavelengths photons. This deeper pixel well enhances detection of NIR wavelengths by up to a factor of two depending on the certain wavelengths studied. And given that the well structure also isolates the photodiodes from each other, the increase in NIR sensitivity comes without reduction in image sharpness.

According to Herb Erhardt, Vice President and GM, Industrial and Security pision, Image Sensor Group at ON Semiconductor, camera manufacturers and end customers continue to verify that products based on both CCD and CMOS technologies would be required in these markets, making it critical for them to continue to develop and advance both of these technologies. He added that the KAI-08052 gives a huge improvement in NIR sensitivity compared to their standard pixel design, and they anticipate utilizing this technology in additional products in the future.

Offered in a RoHS-compliant CPGA-67 package in Bayer Color, Sparse Color, and Monochrome configurations, KAI-08052 is also pin compatible with the existing KAI-08051 image sensor as well as a family of 5.5 µm and 7.4 µm CCD image sensors.