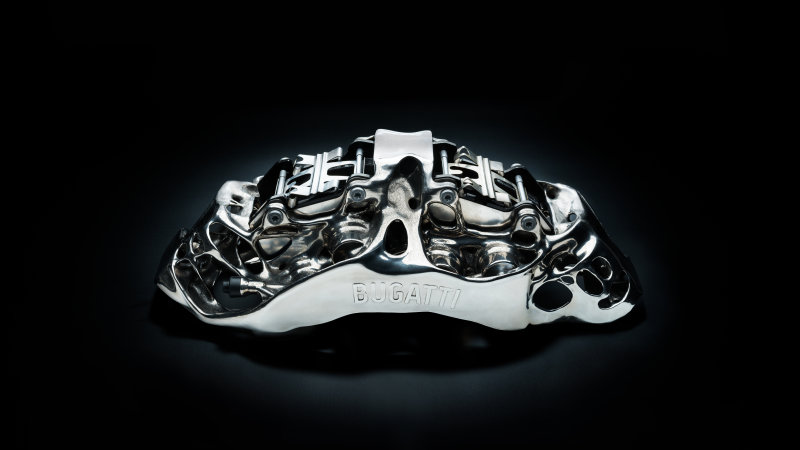 3D printing has been around for a long time but the automotive industry has started taking advantage of the benefits of the new technology only recently and has not done on a large scale. Mini started out by offering customizable trim and interior components. Michelin developed an airless 3D-printed tire. When it comes to supercar brands, the Koenigsegg used 3D-printed turbochargers for its Agera One:1. Now, Bugatti is joining the list of automotive companies to use 3D-printed components. The company is testing 3D-printed brake calipers on the new Chiron.

Bugatti has trimmed all unnecessary material from the calipers in an effort to reduce their weight. Normally, there are limits to the extent weight can be reduced as a casting process is used for the production of calipers. The aluminum that is used for manufacturing must fit into the specified mold and this always involves the use of some excess material. This does not apply to 3D-printing. When a 3D-printer is used, the component can be created layer by layer. Conventionally, brake calipers are made from aluminum, but in the case of the Chiron, Bugatti will be making the brake calipers from titanium.

According to Bugatti, the brake calipers for the Chiron will be the largest such functional component made of 3D-printed titanium. The shape of the calipers is such that they have maximum stiffness while keeping the unsprung weight at the car’s corners to the minimum. The titanium alloy that Bugatti uses for the calipers is the same one that is used in the aviation industry for the manufacture of components like rocket engines and the wings of airplanes. The new calipers have a weight of 6.4 pounds each, which is considerably less than 10.8 pounds, the weight of the calipers used in the outgoing model. They also have higher tensile strength. Hence, the new brake calipers are not only lighter but are also stronger than before.

The only disadvantage of using 3D printing for the manufacture of brake calipers is the long time that the production takes. 45 hours is the time that is needed for the production of each individual caliper. In the case of a limited production run like that of the Chron, time is not really an issue, but in the event that the technology is to be used for mass model vehicles, this time has to come down significantly. Bugatti has begun testing the 3D-printed brake calipers and hopes to reduce the time needed for production as time goes by.