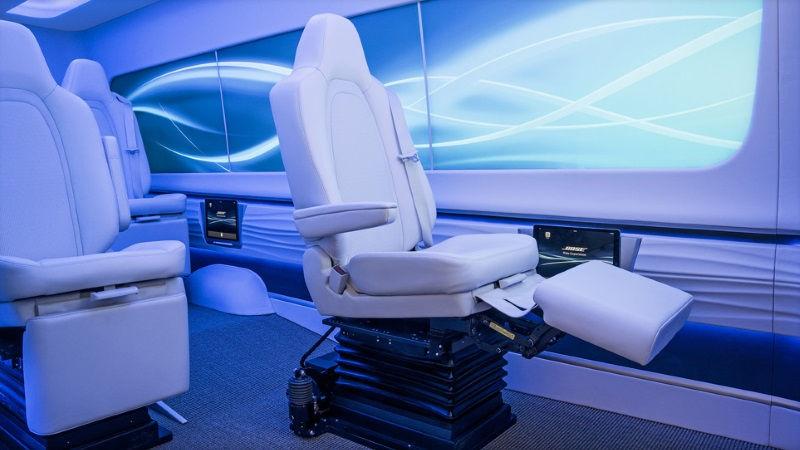 Bose is a brand that is generally known more for the sound systems that it designs for renowned automakers like Nissan than its suspension systems. At the recent CES Show, the company showcased its expertise in active seat suspension. The company has already carved a niche for itself when it comes to production of seat suspension technology for heavy vehicles, and has now turned its focus towards passenger cars.

At the CES Show, the focal point at the company’s booth was a van that was fitted with prototype versions of the seating technology. Visitors to the show were asked to sit in the van and perform drawing and writing tasks as they sat in a comfortable seat while the van simulated riding over obstacles which represented speedbumps, potholes and an angled driveway. The vehicle experienced strong lateral and vertical motion and it was difficult for visitors to use the stylus on an iPad. When the Bose suspension system was activated, the seat moved independently from the vehicle and absorbed the impact of much of the motion. The efficacy of the suspension technology was particularly striking when the van passed over uneven bumps. While the top and the sides of the van moved to a large extent, the seat remained upright and centered.

Bose thinks the technology could be highly effective in the case of autonomous passenger cars, where the riders will have a lot more time to concentrate on tasks other than driving like writing or using their tablets.

In the production seats for trucks, which are called Bose Ride, an electromagnetic motor is used to control vertical motion, and this keeps the rider’s thorax insulated from hard shocks. A sensor is used to detect the beginning of a shock moment, and the integrated electromagnetic motor in the seat responds. In the prototype that was demonstrated at the CES Show, a cradle was added to the seat to offset lateral motion and hence there was a greater degree of lateral control.

While the Bose Ride seats have been built for commercial vehicles and are currently too large for passenger cars, Bose is working on adapting the technology to make it suitable for smaller vehicles. There is every chance that the technology will become more widespread in the future. Hence, a ride in a sports car no longer needs to compromise comfort for performance. While the suspension could be designed to handle high speeds and higher power, the seat’s suspension could be optimized for a comfortable ride.