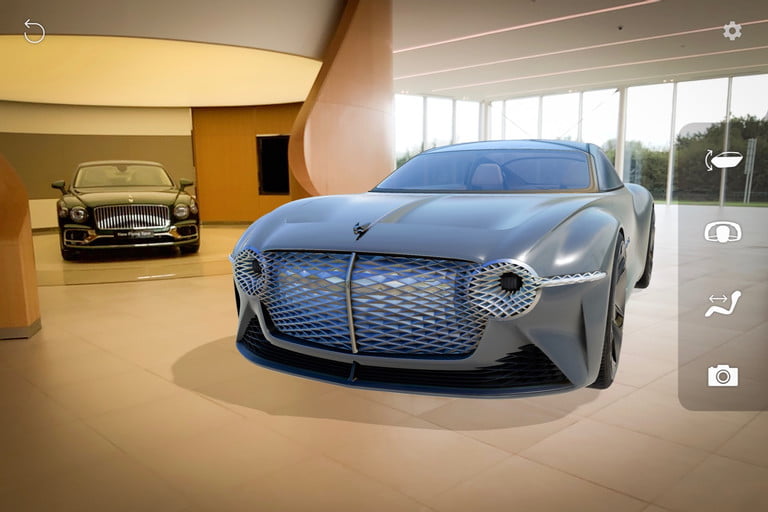 Bentley might be a brand that is celebrating its centenary, but it has positioned itself for growth in the future with the new EXP 100 GT Concept. It has now made the concept car just the car for digital natives by developing a tailor made augmented-reality app.

Bentley 100 AR is an app which is available only for Apple devices and makes it possible for users to get the feel of driving the EXP 100 GT concept by scanning a QR code. The app provides browsers with access to full 3D models of the interior and exterior of the concept car. It is possible for users of the app to view a full-scale virtual model of the car at Bentley dealers, with commentary from the team that designed it. Users can also download 3:4 scale and “desktop” models of the car at home.

Many automakers have tried developing apps that will allow internet users to access to virtual models so that they can get a up-close look at different models without stepping out of the comfort of their homes.

Bentley made only one EXP 100 GT concept, and not everyone can get to see it. Using the app, however, virtually anyone can get to “see” and experience the car. Automotive manufacturers are also using similar technology to help designers spread across different locations to collaborate on changes in design by looking at the same virtual model of a car.

The EXP 100 GT is definitely an impressive car. It is a huge coupe that is significantly bigger than the Bentley Continental. The car is powered by four electric motors which together have an output of 1,106 pound-feet of torque. According to Bentley, the car takes less than 2.5 seconds to accelerate from zero to 60 mph and can attain a top speed of 186 mph. The car also comes with biometric sensors which can be used to determine the most comfortable seating positions, and keeps tabs on the eye movement and blood pressure of occupants to detect if there are any signs of discomfort. The car represents Bentley’s take on luxury cars of the future.

As of now, it is not clear when we can expect to see cars with such features on the road, but Bentley has definite plans to launch an all-electric Bentley production model by 2025, and in the runup to the launch of this model, the carmaker is planning to add a hybrid powertrain to every model by 2023, with the first model to have a hybrid powertrain being the Bentayga SUV.