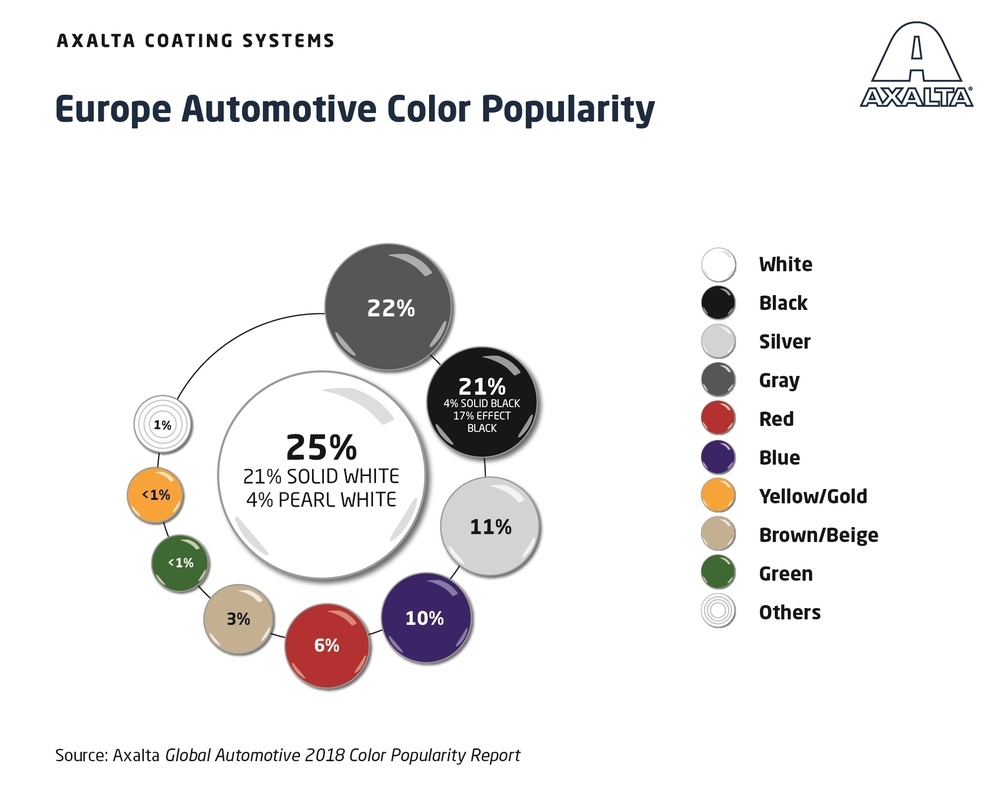 Axalta, which is one of the market leaders in the coatings industry has just released the 67th edition of its annual Global Automotive Color Popularity Report. The report reveals that the most preferred three automotive colors are White (38 percent), Black (19 percent), and Gray (13 percent). White is top color for the ninth straight year and has been the most preferred color in the automotive segment from 2011.

The color which failed to make it to the list of the top three shades is silver and at 10 percent, this was the lowest level that silver has been at for more than 10 years. The survey also indicated that Gray is gaining in popularity across the globe. The top four colors – White, Black, Gray and Silver – aaccount for 80 percent of the market share globally and continue to dominate the automotive market.

Commenting on the report, Nancy Lockhart, Axalta Global Product Manager – Color said that the company was pleased to release the 2019 Global Automotive Color Popularity Report. Axalta is truly the world leader in identifying trends and helping its customers to deliver cars in the best assortment of the most popular colors as it has spent over 65 years studying consumer preferences on automotive colors

From a regional perspective, there has not been much change in terms of color preferences in 2019. The only notable change is that white declined by 1 percent in Europe and Gray increased 2 percent, thus edging white out and becoming the top color in Europe for the first time ever.

“After the demand for Gray rose in the SUV sector last year in Europe, we saw 5 percent growth this year in the Compact/Sport sector. For the first time in Europe, the variety of natural to refined and sophisticated Gray surpassed White as the long-time favorite. Europeans have expressed their desire to use Gray to quieten the emotional noise in their lives and feel comforted by its presence,” said Elke Dirks, Color Designer – Europe, Middle East & Africa.

In other parts of the world, White continued to be the market leader, with Asia recording a 1 percent increase in its popularity and being the market where white had the highest popularity levels, 49 percent.

North and South America continue to retain White as the top color, but are also seeing Gray becoming more popular.

“While the top four neutral colors – White, Black, Gray, and Silver – continue to lead preferences globally,” continued Lockhart, “we are starting to see other colors make moves in popularity that might not have been thinkable in past years. For sure, the consumer is truly beginning to change the way they view their vehicle’s color, and Axalta is prepared to partner with our automotive customers to meet those needs.”

In North America, red is popular at 9 percent, while in Russia Brown and Beige variants dominate at 12 percent. Various shades of blue ranging from greenish-blues inspired by the ocean to Navy Blue, Icy Blue, and Denim Blue are also quite popular. Color plays a major role in consumer choices and product branding, and Axalta has demonstrated that it is committed to enhancing coatings with color science and technologies for future vehicles.

“Colorful shades on vehicles are quickly noticed on today’s roads as Blue, Red, and Brown/Beige are showcased in spectacular hues,” concluded Lockhart. “Blue is most popular in North America and Europe with 10 percent of vehicles. So, finding a Blue to meet your personal taste is no problem.”

The regional highlights from the 2019 report are as follows:
• Africa – Light colors such as Silver and White remain high at 58 percent combined.
• Asia – Pearl White colors are most popular in this region and continue to gain status.
• Europe – Gray is the most popular color, surpassing White, the long-time favorite.
• North America – Blue is up 2 percent, totaling 10 percent of vehicles.
• Russia – 12 percent are warm shades of Beige/Brown, more than any other region.
• South America – Changing 1 percent, this is the only region where Silver increased.

Axalta’s annual Global Automotive Color Popularity Report was first published in 1953, and is the automotive industry’s longest running and most comprehensive color account. The company’s color experts compile this report as well as its Color Trend Report and they both give automotive OEMs captivating insights into consumer preferences thus helping them to make informed decisions about auto colors.