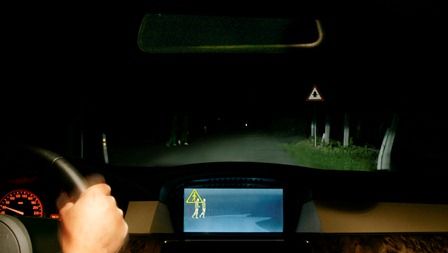 Swedish-American company Autoliv claims that its newly developed technology can reduce the 1.1 million crashes between vehicles and deer on American roads yearly.

The new night-vision system for cars utilizes infrared sensors to highlight objects in the road at night before headlights illuminate them. Just like military systems that enable troops to see in the dark on a battlefield, it is reliant on an infrared camera that produces thermal images of what is ahead, with animals, cyclists, and pedestrians glowing more brightly than what is around them.

To show how the automotive night vision works, Autoliv has released a video demonstrating what the display might look like to drivers. At the start, the night-vision system highlights pedestrians in a crowded urban setting. Later on, it displays deer along a wooded road. Toward the end, the video shows a state-of-the-art “spotlight” function that flashes a light beam on pertinent objects detected by the sensor. When it is a deer, a strobe feature flashes the light on and off as it drives the animal away.

Autoliv is now available on a few high-end models from Audi, BMW, Mercedes, and Cadillac, at a cost of approximately $2,000 when offered as a standalone option. In the video, the system being demonstrated is projected into the windshield where the driver’s eyes are naturally focused through a heads-up display. However, in most cars, the display appears on a dashboard screen in the center stack between the driver and passenger seats where the GPS system usually resides.

Just like most technologies, Autoliv’s automotive night vision has to be more affordable as more people try it out. According to Stuart Klapper, a managing director at Autoliv, the technology will arrive on some mid-level models by next year.