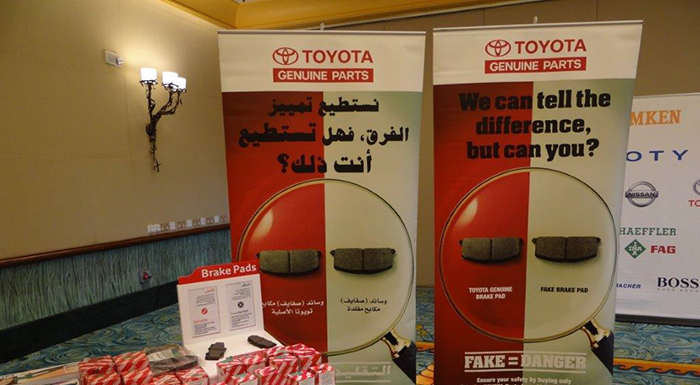 Al-Futtaim Motors, the UAE’s exclusive distributor of Toyota vehicles, continues to take the lead in the fight against the counterfeit industry. Throughout last year, the premier company has carried out a total of 26 raids in collaboration with a number of law firms and the UAE Economic & Development Departments, which paved the way to the confiscation of more than AED 31.3 million worth of fake car parts, and AED 750,000 in fines to the offenders.

77 percent of the raids were carried out in Dubai, while 11 percent were performed in Sharjah, eight percent and four percent in each of Ajman and Umm Al Quwain, respectively. The total number of seized parts surpassed 220,000 products, ranging from engine oil and lubricants, fuel and air filters, to brake discs and brake pads.

The Toyota distributor also organized 10 training sessions, resulting in over 300 trained government officials across the six Emirates, enabling them to spot the differences between counterfeit and genuine parts, as well as to take part in 13 various exhibitions to educate the general public regarding the dangers of fake parts.

Ralf Zimmermann, General Manager After Sales at Al-Futtaim Motors, said that their company has come a long way in the fight against fake products, having performed hundreds of raids over the last few years and confiscating hundreds of millions worth of sized products from the UAE market. He noted that Al-Futtaim has always stressed the significance of installing only genuine and manufacture-approved parts on vehicles and they continue to invest in educating the public against purchasing fake products. “In the long run, the costs savings from counterfeit product is diminished due to highly degraded quality that requires more frequent replacing, aside from being unsafe and potentially endangering the lives of drivers and passengers.”

Genuine spare parts sold by Al-Futtaim Motors from Toyota, Hino, Lexus and Toyota Material Handling Equipment are built to meet the highest quality standards to guarantee the utmost in longevity, safety and added value to its customers.