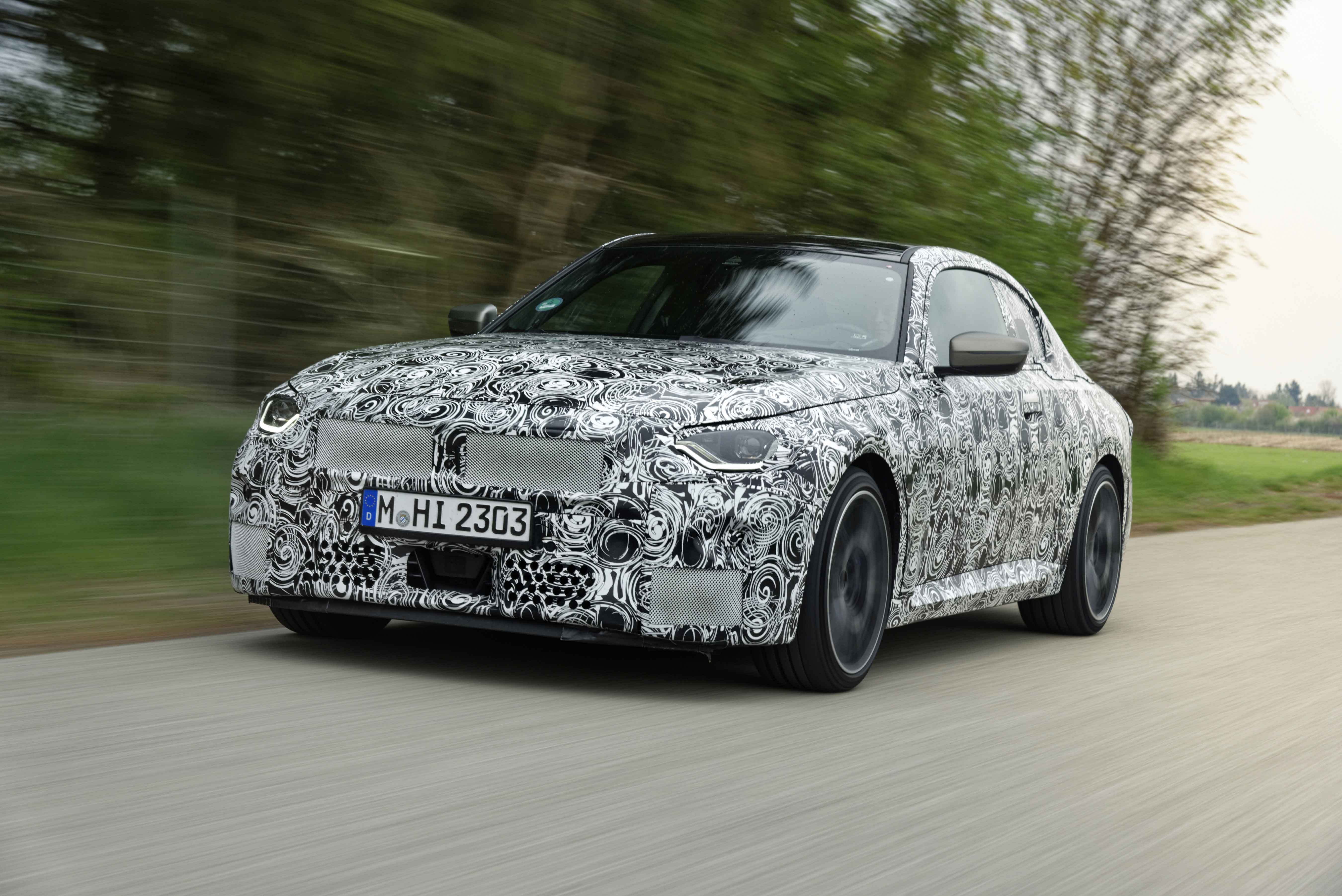 On the final straight to unique driving dynamics The new BMW 2 Series Coupé.

The new BMW 2 Series Coupé is on the final stretch as it heads to the front row of the grid. The final phase of the series development process for the new edition of the BMW 2 Series Coupé has begun with the dynamic testing and tuning of its drive and suspension systems under racetrack conditions. The two-door compact sports car features numerous hallmark ingredients that are unique in the premium compact segment for achieving a sporty and emotional driving experience, which are carefully coordinated during the test drives. This is what underpins this car’s claim to taking pole position in its class. The unique selling points of the new BMW 2 Series Coupé in the competitive environment include the rear-wheel drive setup, an extremely powerful in-line 6-cylinder engine, the almost 50:50 balanced axle load distribution, an extremely torsionally stiff body and chassis technology consistently designed for agile and dynamic driving behaviour.

Sporty driving pleasure in the tradition of the BMW 2002.
The new BMW 2 Series Coupé, which will be manufactured from late summer 2021, is designed for uncompromising sporty driving pleasure. It continues the tradition of the brand’s particularly driver-oriented, compact and powerful two-door models, which have been built since the legendary BMW 2002. In terms of power delivery, traction, cornering dynamics and handling precision, the new BMW 2 Series Coupé meets the needs of particularly discerning customers who are enthusiastic about unadulterated sportiness in a compact premium automobile.

During the development of the new BMW 2 Series Coupé, the test and tuning drives on the Nürburgring’s Nordschleife serve as the ultimate test for wheel suspension, chassis, damping, steering and braking system. In addition, testing on public country roads around Munich and at the BMW Group test site in Maisach ensure that the dynamic driving qualities of the new BMW 2 Series Coupé can also be experienced in everyday traffic and under different road conditions. By extensively testing all drive and chassis systems, the development and test engineers ensure that the engine’s performance characteristics go hand in hand with precisely controllable handling in every situation, fascinating cornering dynamics, optimised traction in all weather and road conditions and perfectly balanced ride comfort. At the same time, the car is fine-tuned to optimise self-steering behaviour and the dynamics when building up lateral acceleration forces. The power transmission to the rear wheels, which is unique in the segment of the new BMW 2 Series Coupé, is ideally suited to sporty, ambitious cornering including easily controllable drift manoeuvres.

BMW M version at the top of the model range.
The new BMW 2 Series Coupé’s focus on maximum driving dynamics in the segment is embodied particularly by the BMW M version at the top of the model range. The BMW M240i xDrive Coupé top model (fuel consumption combined: 8.2 l/100 km, combined CO2 emissions: 186 g/km; provisional value according to WLTP) draws its drive torque from an extremely powerful in-line 6-cylinder petrol engine with BMW TwinPower Turbo technology. The drive, which is as spontaneously responsive as it is powerfully thrusty, generates a maximum output of 275 kW/374 hp and is combined with an 8-speed Steptronic Sport transmission. The BMW M model puts its power to the road using the intelligent BMW xDrive all-wheel drive system. The system’s rear-wheel oriented design ensures hallmark BMW driving pleasure in conjunction with a power distribution that adapts perfectly to adverse road and weather conditions.

The driving dynamics tests also conducted on the Nürburgring, are ideally suited for refining the interaction of the all-wheel-drive system with the M sports differential in the rear-axle transmission. With a fully variable locking effect generated by an electric motor, the differential aids the new BMW 2 Series Coupé in optimising cornering performance with regard to traction and driving stability. The targeted distribution of power between the rear wheels enables significantly higher lateral acceleration and also a noticeable increase in dynamics when accelerating as you come out of bends.

Vehicle concept designed for driving dynamics.
Regardless of the engine, all model variants of the new BMW 2 Series Coupé benefit from a particularly torsion-resistant body structure. Static torsional stiffness has been increased by around 12 per cent compared to the predecessor model, for example through the use of dynamic driving struts in the rear of the vehicle, which contribute to the exceptionally high agility of the new BMW 2 Series Coupé. In addition, the vehicle concept, which is consistently designed for driving dynamics, offers significantly increased track width at the front and rear axles. This effectively reduces body roll and wheel load fluctuations during sporty cornering.

All model variants of the new BMW 2 Series Coupé are also equipped with stroke-dependent dampers as standard, the fine-tuning of which leads to a noticeably optimised balance between sportiness and ride comfort. They respond sensitively to slight road unevenness and compensate vibrations to optimise comfort. When driving over large bumps, the movements of the body are controlled by correspondingly higher damper forces. An Adaptive M Chassis is offered as an option for the new BMW 2 Series Coupé. Its electronically controlled dampers offer the option of activating the appropriate mapping for both sporty and comfort-oriented driving.

Precise steering, optimised aerodynamic properties.
The new BMW 2 Series Coupé is characterised by effortlessly controllable handling even in highly dynamic driving situations. In addition to the powerful and highly controllable brakes, the precise steering also characterises the handling of the two-door model. In addition to the balanced axle load distribution between the front and rear wheels, the model-specific design of the steering and the particularly high connection stiffness of the support bearings on the front axle contribute to this. Available as an option for the new BMW 2 Series Coupé, Variable Sports Steering combines further optimised precision when steering into bends with reduced steering effort when parking and manoeuvring.

The body design of the new BMW 2 Series Coupé not only reflects the brand’s modern, clear and reduced design language. Only visible at second glance, but immediately noticeable during the high-speed test drives at the Nürburgring, the measures that help optimise the aerodynamic properties of the BMW M car in particular. In addition to a model-specific front spoiler lip, front splitter and air curtains, air deflectors, a tank and a rear axle cover as well as the contours of the air-flow-optimised driving dynamics struts on the underbody ensure that lift on the front axle has been reduced by 50 percent compared to the predecessor model.